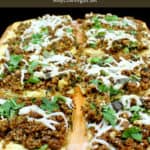 Pizza for breakfast is always a winner, and this Vegan Sausage Breakfast Pizza is as perfect as it can get, with a flaky vegan buttermilk biscuit crust topped with vegan sausage, spinach and cheese. Gluten-free option available.

Savory breakfasts are what gets me out of bed on weekends, and when it's something as alluring as this vegan Sausage Breakfast Pizza with a crust made of vegan biscuit dough, I am up and about with the sun.

This is a delicious little feast all right, with crumbly, spicy bits of sausage sitting on top of a flaky biscuit crunch that gets all crispy at the edges. There's vegan parmesan stirred into the garlicky, herby sausage to give it more oomph. On top of it all I scatter a good handful of vegan mozzarella shreds.

This is the kind of recipe you definitely want in your arsenal if you're a parent, because is there a word that gets a kid to the table faster than "pizza"? But it's also an everyone-pleasing recipe--something that you can feed to a motley crowd and even please the pickiest eater or that person who thinks that a meal without meat is no meal at all.

And it works even better if you're cooking all for yourself because, come on, who really wants to share this? In my Utopian world, I'm noshing on this for breakfast, lunch, dinner and for a midnight snack.

What we love about this breakfast pizza

How to make this savory breakfast pizza 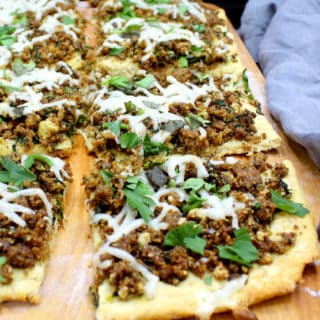