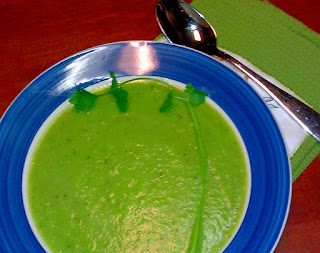 There's something about snow that makes me just crave the fragrant, piping-hot, allium-infused hug of a leek potato soup.

Out here in the Washington area we are preparing for what the weather gods and goddesses (on TV) say will be the coldest January in decades. But so far so good. We have barely dodged a couple of major snowstorms, leaving the snow-seeking Desi chagrined and me happy as a squirrel. And no, don't take that to mean I don't love the snow. It's just that I love it more on the weekends, for reasons anyone who works for a living can well imagine.

Yesterday, after a stressful ride home -- my car's windscreen and mirrors iced over by a nasty wintry mix that preceded a glorious snowfall-- I was simply desperate for the comfort of some soup. I was in luck, because I had a leek on hand. And potatoes. I also had some cilantro which, I knew, would add the perfect mix of tang and bite to the soup.

This leek potato soup is extremely simple to make, but so delicious that you-- and everyone else-- will be asking for seconds. Enough said, and on with the recipe.

Hope you're enjoying the winter, all! 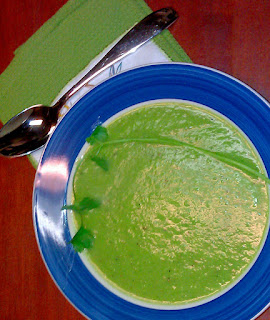 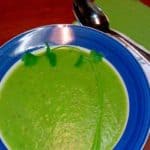 If you follow this blog, you've probably noticed that I rarely peel or stem vegetables and herbs. While you definitely need to strip some foods bare before you add them to your pot or plate, like coconut and avocado, most thin-skinned veggies can go into your pot as they are. Carrots, potatoes, sweet potatoes, bitter gourd (karela), and eggplant are few examples of vegetables that are healthier and tastier with their skins on but which, for some reason, get peeled all the time. Remember, valuable nutrients often lie right under -- and sometimes in-- the skins of most veggies, so peeling them only means you lose out on their goodness. Same goes for soft stems of herbs and leafy veggies-- cilantro stems are packed with flavor, for instance, and who in their right minds would take the stems off spinach?

Here's my super-adorable Pie, whose favorite thing to do in the winter is to bask in the sun all day. 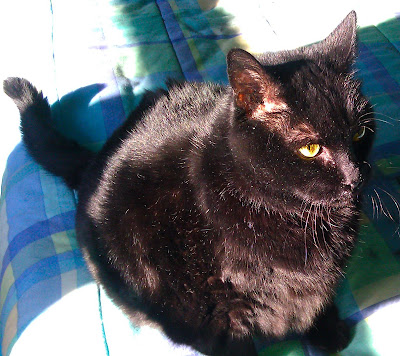