Manakish (also called manoush/mankousheh/manoushe/za'atar bread) is a puffy, pizza-like Lebanese flatbread that's baked with the addictive middle eastern herb and spice mix, za'atar, then stuffed with veggies. It's often eaten as a wrap for breakfast, but it makes a delicious meal for anytime. My vegan version has a flavorful, smoky spinach filling and it is stuffed with cherry tomatoes and sweet peppers.

Earlier this week, on what happened to be World Mankousheh Day, my Armenian-American friend Margo shared a memory of eating this beloved Lebanese flatbread where she grew up, near Beirut. She'd visit the bakery with her dad, she wrote, and on the way home in the car, sneak a few bites of the still warm Mankousheh.

I had never eaten this bread before, and it looked so pizza-like, Jay was entranced. So I set about trying my hand at making it with some inspiration from David Tanis who, in this article, says they are a common offering at Lebanese food stands in Parisian markets.

As it turned out, making manakish couldn't have been easier, and the result was a gorgeously flavorful and fun breakfast that I -- and Jay, I think -- could eat every day.

Is a Manakish like a naan or a pizza?

I like to think of it as a cross between the two.

The manakish dough is very much like a pizza or naan dough. You leaven it with yeast, let it rise, then stretch it by hand or roll it as thin as you can. You spread it with a flavorful mix of olive oil and za'atar and bake it in an oven where it puffs and crisps up, becoming quite divine.

Za'atar or zahtar is a widely used Middle Eastern herb mix. You will most likely find it in your supermarket or online (I will add an affiliate link in the recipe box to the brand I use). It is usually made with dry za'atar leaves, a plant in the mint family, sesame seeds, and sumac, a bright red powder made by crushing wild sumac berries, among other ingredients.

Apparently there are as many variations of this herb mix as there are families. Margo wrote that the za'atar toping is special in this dish because there are so many varieties or combinations of spices; in fact, in Lebanon, it was, and probably still is traditional for families to bring their own special Zaatar mixture to the baker who would then use it to create their special Mankousheh, she said.

I love za'atar and always keep it on hand to sprinkle into my favorite dishes like this Eggplant Hummus, this No-Oil Roasted Eggplant Soup and this Squash Dip. And although mine is just the bottled kind I buy off the shelf or online, I love the smoky, lemony flavor it adds to nearly anything. Yum.

The bread itself needs just five ingredients--yeast, water, sugar, flour and extra virgin olive oil. As always, start out by blooming the yeast in the water, add the flour, and make sure that you knead it into a dough that's just slightly sticky but smooth.

Don't add all of the water at once. Add a cup first and then drizzle in more, if needed, until the slightly tacky but smooth dough forms.

Shape the dough into a smooth ball and place in an oiled bowl to rise for about an hour. The divide it into eight balls, cover them, and set them aside for about 20 minutes so they relax and it's easier to stretch them into little manakish pizzas.

Make the oil and za'atar mix

This is the easy part. Mix 3 tablespoon of za'atar with 3 tablespoon of extra virgin olive oil. You will brush this mixture on the manakish the first thing after you roll them.

This is not a traditional filling, not to my knowledge, but I improvised using some common spices and flavors found in middle eastern food to make it, and it was incredibly yummy and smoky. We loved it on the manakish and it made the bread that much healthier. To make it, all you do is saute onions and garlic in oil, add 8 oz of frozen spinach to the pan along with cumin, coriander, paprika and ground allspice. Salt, pepper, and you're done.

Traditionally manakish is often is topped with local cheeses called akawi or nabulsi. As cheeses, by any name, are not allowed in this kitchen unless they came from a plant, I used Daiya mozzarella shreds. I layered on the za'atar oil, then the spinach stuffing, and finally the cheese and baked the manakish. Once it was ready, I piled on fresh parsley, cherry tomatoes and sliced sweet peppers. Yum.

Any kinds of veggies that can be eaten raw would work here--zucchini, cucumbers, baby spinach, salad greens, including lettuce, bell peppers, tomatoes, scallions...you take your pick. 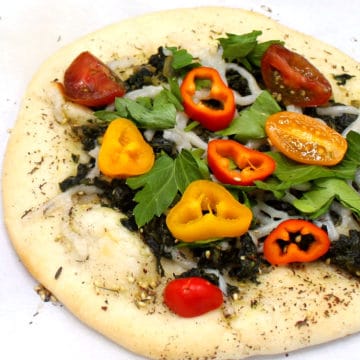 Manakish, a Lebanese flatbread with za'atar

For the manakish dough

For the za'atar oil

For the spinach stuffing