Celebrations in India often hinge around religious events, but you don't have to be religious to join in the fun.

This week, Hindus celebrate Ganesh Chaturthi, a festival so crammed with food and festivities that as a child it used to be my favorite time of the year-- more so than even Diwali, the mother of all Hindu festivals.

Ganesh Chaturthi is the birthday of Ganesh or Ganapati, a lovable, child-like god of many contradictions: his friend and vehicle of choice is a tiny, playful mouse and that's quite a tall order given that Ganesh himself is a pretty chubby guy with the head of an elephant, trunk and all. And despite his mischief-loving and sometimes smarty-pants disposition chronicled in dozens of bedtime stories, he occupies a hefty position in the Hindu pantheon of 30 million gods, as the deity of wisdom, intellect and knowledge.

He's also a popular guy: different groups of Hindus pledge allegiance to different gods, but everyone adores Ganesh no matter who their family deity is. So no wonder then that they throw him a bigger birthday party than they do for almost anyone else. One, in fact, that lasts five, 10 and, in some cases, even 20 days.

There's one more thing that makes Ganesh Chaturthi unique: it's not just celebrated within families; but by entire communities together, including people of different faiths. In Maharashtra -- the state where I grew up-- everyone in the neighborhood would pitch in to buy large Ganesh idols that would then be housed in decorative tents or pandals. Music would blare from loudspeakers, sometimes songs of praise for Ganesh but just as often raucous and raunchy Bollywood movie music. It was the time of year when you didn't rush to ask the organizers to turn it down: instead, you joined in the spirit and grabbed at a chance to play hooky from homework.
The Ganesh idols are always made specially for the celebration, and always immersed in the sea at the end of the festival. Some were -- and still are-- incredibly ostentatious, covered in diamonds (not real), shimmering glass or silver or gold and sometimes dozens of feet tall. But they were not the only highlight of these pandals. Communities competed to come up with topical and mythological themes to decorate their pandals: you'd find everything from social issues like women's upliftment to tales like the Ramayana featured. There were even contests for the best Ganesh decor. This year, in Pune, where the community Ganesh Chaturthi celebrations first originated and which has been particularly hard hit by the H1N1 virus, there's even a Ganesh pandal with a Swine Flu theme. 🙂

When I lived in India, one of the high points of this time of the year was making the rounds of the best known Ganesh pandals around the city to ogle at the various idols.

But the most fun was to be had at my family's five-day celebration--always held at the home of my uncle who got the honor since he was the oldest male in the family-- because of the incredibly delicious food that my mother and aunts cooked up each day.

Ganesh's most lovable quality, to my mind, is that he loves to eat. The food, then, always had to be special and, as with all Hindu celebrations in my part of India, it had to be vegetarian (because, dummy, gods don't eat innocent animals). Of all these dishes, each unique, nothing was more special than Modak, the sweet-stuffed dumpling (steamed or fried) that is said to be Ganesh's most favorite of all foods.

While I don't celebrate Ganesh Chaturthi any more in my home far from India, I always get nostalgic when this time of year rolls around. And while I don't always make the effort to coordinate food and festivals as my mom and aunts did, this year I decided to go ahead and make modaks during Ganesh Chaturthi, partly because I wanted to share with all of you this wonderful, delectable sweet.

I like the steamed version of this dish, but I'd be lying if I were to say I didn't love the deep-fried version more. Biting through the crispy exterior to get into the soft, squishy, sweet surprise inside is an experience that has to be eaten to be believed.

I make my modaks as traditionally as my mom and aunts made them, but because I don't always get the same ingredients here, I made some modifications. They worked so well, I couldn't tell the difference. For instance, because I use pre-shredded coconut which is dryer than coconut that's freshly grated, I added a tiny bit of coconut milk to give the filling the right texture. I also added a few drops of lemon juice to the intensely sweet filling-- although this is not a traditional ingredient, I think it really cuts through the cloying sweetness without making the filling sour.

Here's the recipe. Happy Ganesh Chaturthi to all! 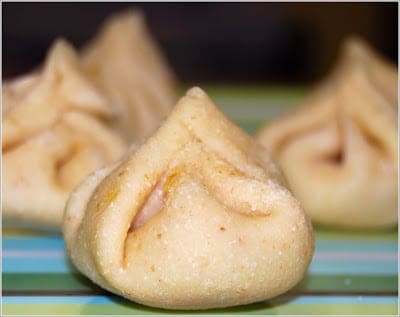 For the coconut filling