This cloudy, pillowy, crusty and herby sourdough focaccia studded with olives is a bread you'll be wanting to make over and over again. It's the perfect bread to slice up for a delicious sandwich, or to top with all sorts of tasty tidbits, or to simply dunk into a marinara sauce and chew on. Heaven. 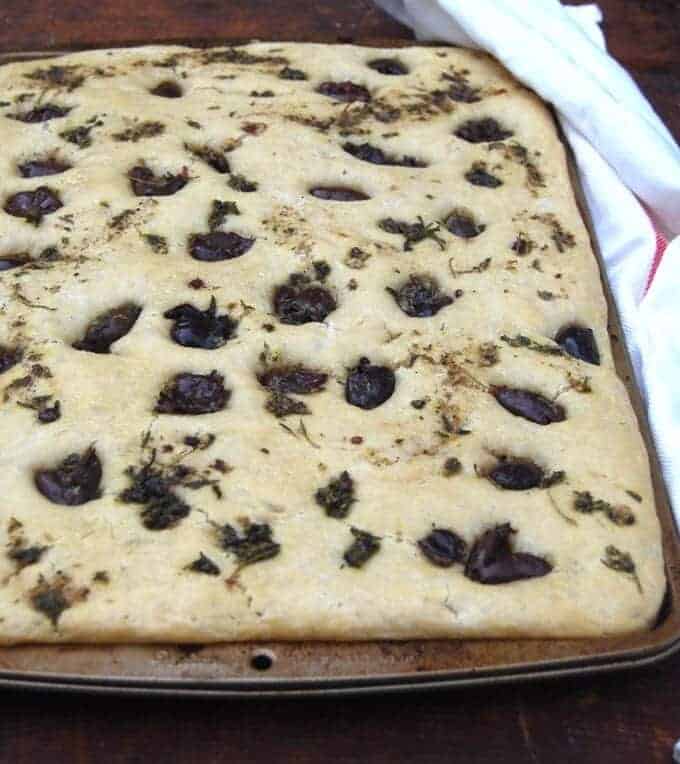 If you followed along with our tutorial on how to make a sourdough starter from last week, you have a pot of bubbling starter in your kitchen now, waiting to be used in all kinds of delicious breads and more. Because you need two cups of sourdough starter for this focaccia, you will want to increase the amount of your starter. I did that by just adding a cup more of flour and ¾ of a cup of water to my starter the day before I baked this sourdough focaccia, which gave me plenty of starter for the bread with some left over to keep my starter going. 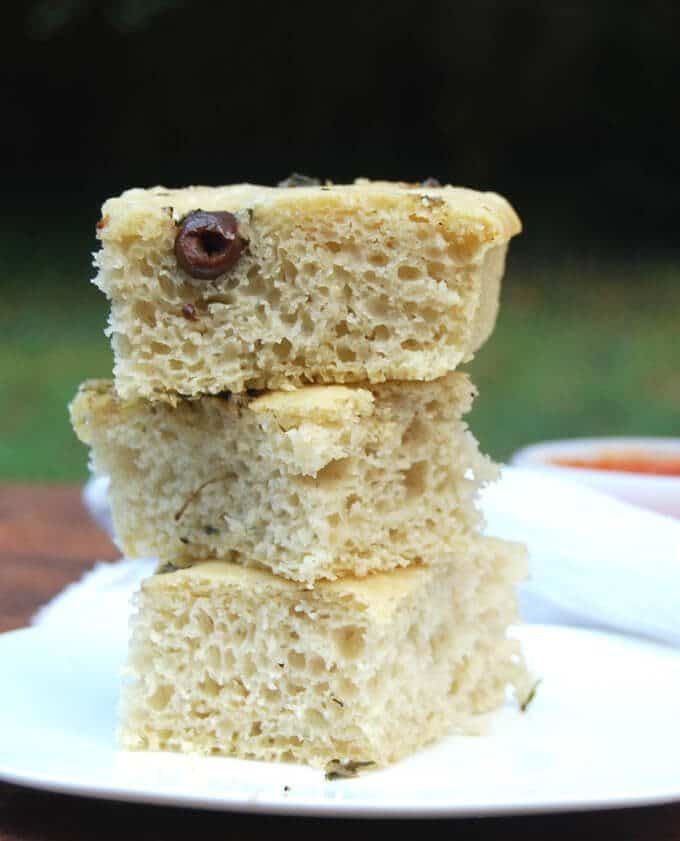 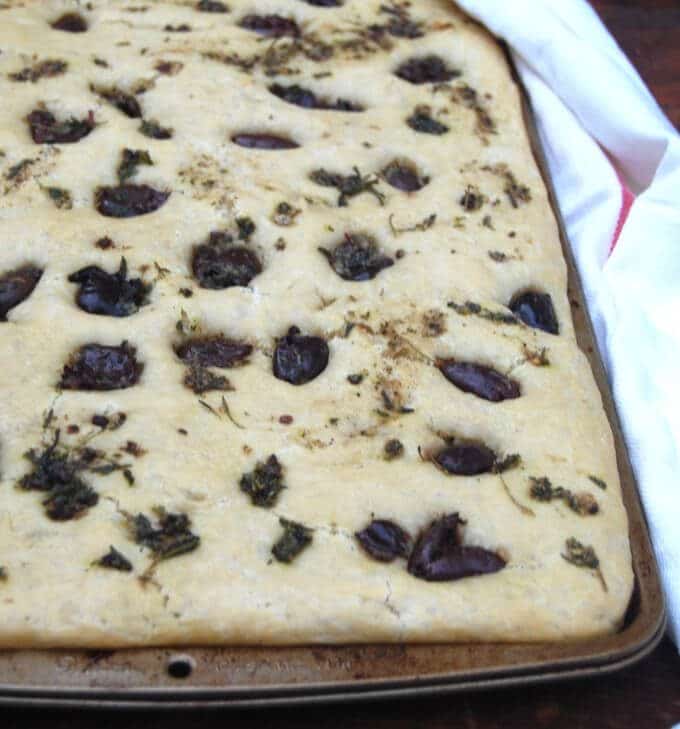 This focaccia takes a little time to make, although it's not dedicated time. You want to soak some of your flour overnight with the starter and then mix up the dough with the rest of the flour the following day. The dough is rather loose-- even more so than the dough for a ciabatta batter -- but that's what gives this bread those wonderful, airy holes, its soft, pillowy crumb, and that crispy, crackly crust. 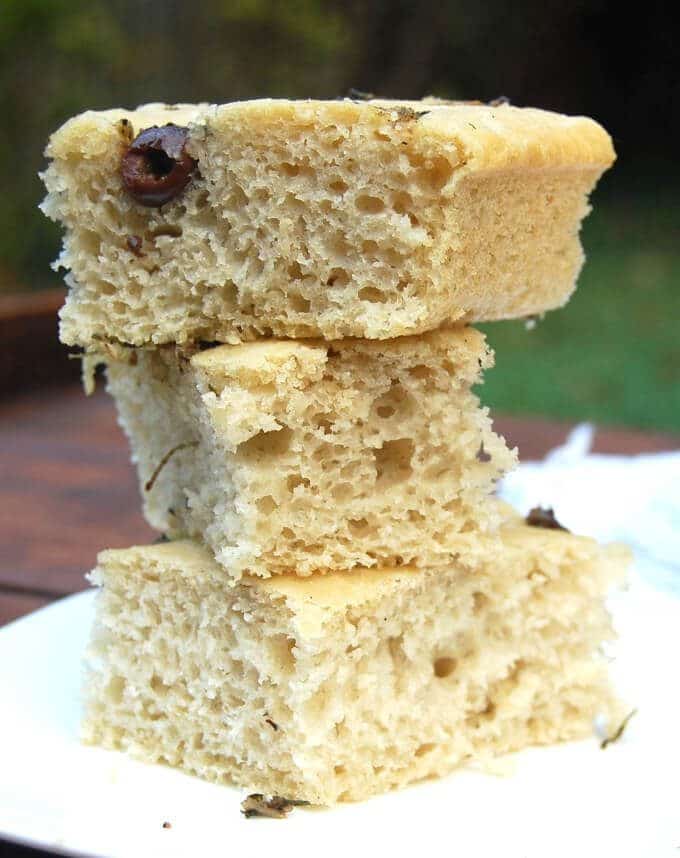 I smashed together some garlic, black pepper, salt, a bouquet of savory herbs, and extra virgin olive oil -- along with kalamata olives -- to smear on top of my focaccia, but you can keep it simple and just brush on some garlic, salt, and herbs. As the bread rises in the oven, the olives sink into the crust and the flavor of the herbs wafts all around the house, making it smell rather like a holiday.

This bread bakes up in a large, 15-inch baking pan, so you'll have enough sourdough focaccia to feed an army or a rather hungry family. To make a smaller bread, halve the recipe and bake in a smaller pan. 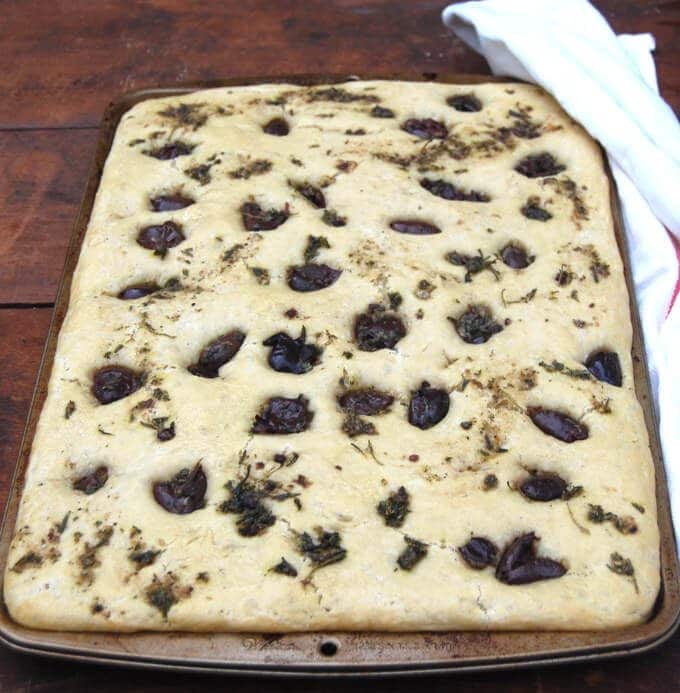 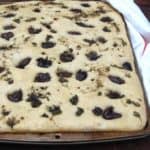