This fun, kid-friendly, everyone-friendly snack of vegan Lasagna Dip and Chips is exactly what you need to punctuate those moments of agony and ecstacy as you scream at the television, jump up and down and sit at the edge of your couch this Sunday. Dip is gluten-free.

A cheesy, tomatoey lasagna dip with crispy lasagna noodle chips to dunk in sounds like a ridiculously simple idea for a terrific snack, and so it is.

If you plan to gather around the television this weekend with family and friends to watch the game (or just plan to flop down on the couch with your favorite Netflix show) and are looking for a dish everyone will love, you couldn't go wrong with this one.

It's easy to make, it's quite healthy, and it's rather fun. All you need to do to make the lasagna dip is get together your favorite lasagna ingredients, layer them on without the noodles, and bake it.

For the lasagna chips, you'll be cutting up lasagna noodles and baking them until they're crispy and golden, before tossing them with some good stuff, like vegan parm.

I was shopping at Safeway last weekend and I felt a small thrill when Jay excitedly called me to the meat aisle to point out packets of Beyond Beef and another plant-based brands right there next to the actual meat. Safeway does sell a lot of plant-based alternatives, but mostly they are stocked separately in a single, hard-to-find freezer. It's good to see plant-based meat finally elbowing out the other stuff and getting into the mainstream.

In fact, veganism is really having its moment in the media. Did you read about a judge ruling in the UK that ethical veganism is a protected class like religion? Or read this inspiring article from my hometown newspaper, the Washington Post, about the dizzying rise in veganism among African Americans paved by hip hop?

Now for that lasagna dip and chips.

How to make the perfect vegan lasagna dip and chips: 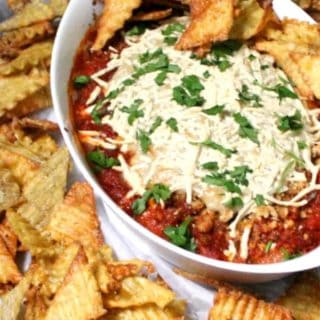 For the cashew ricotta:

For the lasagna noodle chips:

To make the lasagna chips: