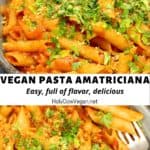 Pasta Amatriciana gets an everyone-friendly and delicious makeover in this vegan version. A brick-red tomato sauce is flavored with garlic, onions, fennel, red pepper and parsley, then tossed with penne pasta. It is as tasty as it is easy, and it makes a great weeknight vegan pasta dinner.

There are as many versions of an amatriciana sauce, a classic Roman pasta sauce, as there are cooks. Today, I have for you my very own version--one I arrived at after lots of research and testing. I guarantee you'll love it.

Some versions of Pasta Amatriciana, I found, are vegetarian, and use no meat. Others rely on guanciale, a kind of pork, for flavor. Some use onions, others do not. Mine is kinda my own.

This vegan Pasta Amatriciana is an easy recipe, especially if you buy garlic that has already been peeled, as you'll otherwise need to peel two whole bulbs. The only other prep needed is to slice an onion.

Try it, then come back and let me know!

What we love about this pasta amatriciana 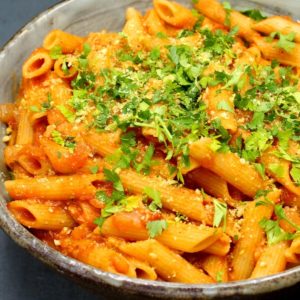