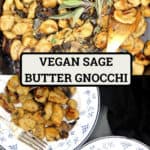 A simple but tasty recipe for vegan gnocchi with sage butter and roasted mushrooms. It's a dinner anyone would love!

There are so many delicious ways to prepare gnocchi, a potato-based Italian pasta, but this vegan sage butter gnocchi is my favorite---and one of the easiest.

I make the vegan gnocchi myself because store-bought gnocchi more often than not tends to have eggs in it. It is a really simple dough that comes together in minutes, although it does take some time to actually make the gnocchi (not too much, though).

As a mom, I also love gnocchi because I know Jay will eat it. In this recipe the gnocchi nuggets cook up golden and crispy while still soft and chewy on the inside. He loves it so much, in fact, that he even eats the mushrooms without batting an eyelid.

The butter and sage are an addictive combo and they infuse the gnocchi with tons of flavor. Sage is an early bloomer in the spring garden, so it's a great herb to use this time of year, although I love using it year round because of the incredible smoky flavor it adds to vegan foods.

You can use storebought gnocchi to make this dish, and that would cut down the time for making this dish to under 15 minutes. But if you plan to prep the gnocchi from scratch, make it on a leisurely weeknight or save it for the weekend. When you do, be sure to let me know!

Gnocchi (pronounced nyokki) is a pasta made with potatoes and wheat flour. Gnocchi nuggets look like shells with an indentation on one side and ridges on the other, to better hold on to sauces.

You can serve gnocchi with all sorts of sauces (thick sauces are good, pestos are my favorite), or you can serve them crispy and dry, as I do in this dish. Because they are so tasty on their own, they are also great sauteed with just a little bit of vegan butter or olive oil and tossed with veggies.

How to make vegan gnocchi

Intimidating though handmade pasta might sound, gnocchi is one of the easiest pastas you can make.

All you need to do is make a dough with baked or roasted potatoes, flour, salt and a fourth of a cup of vegan yogurt or aquafaba (to replace the eggs).

But you need to take some steps to make sure you don't make your flour too sticky or soggy. And here they are:

Can I make the gnocchi ahead of time?

Yes. Cooked gnocchi can be stored in the refrigerator for up to 3 days. If you want to freeze them, flash-freeze them first by placing them a little apart on a baking sheet in the freezer. Once they freeze, you can place them in a freezer-safe bag.
Uncooked gnocchi can be refrigerated for a few hours before cooking, but dust them with flour first to stop them from sticking.

What are the best sauces to serve with vegan gnocchi?

Can I make this vegan gnocchi with whole wheat flour?

Yes, absolutely. Just use whole wheat flour instead of all purpose. The gnocchi won't be as light, but it'll be delicious.

Can I make the gnocchi gluten-free?

Again, yes. Sub with an all purpose gluten-free flour and add half a teaspoon of xanthan gum if your flour doesn't already contain some.

What side dishes should I serve with gnocchi?

A simple, fresh green salad is ideal. You can also serve gnocchi with these lemony Greek roasted potatoes or these garlic butter beets on the side 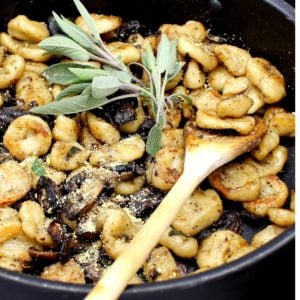