A delicious Wheat Berry Salad with Roasted Beets and Curry Cashew Dressing -- this healthy and easy recipe is an explosion of sweet, savory flavors and crunchy, chewy textures. 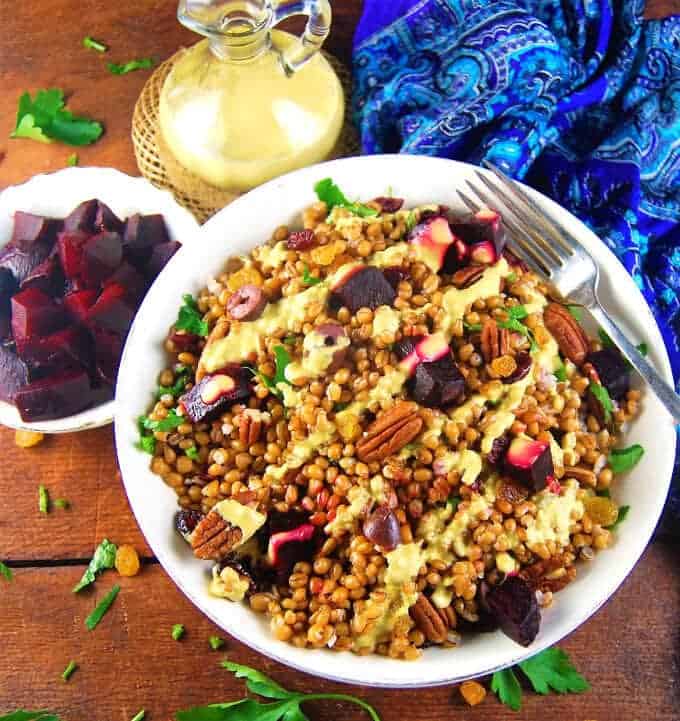 Out here, winter's been a no-show for the most part. Of late, we've been waking up to 65 degree days that have sneaked up past 75 in the afternoons. I actually built up a sweat just walking Leo and Lily this morning, and that's when I noticed the daffodils and hyacinths already pushing out of the ground.

I feel cheated. I wanted winter, the whole nine yards. The snow, the storms, even my frozen fingers and toes crying for mercy on a walk outside.  Cranking up the oven, guilt-free, to bake cookies, cakes and pies. One of the greatest charms, to me, of our D.C. area weather is that winters here are just right: we get two to three snowstorms each season, and our temperatures drop and stay below freezing, but only just. It's not so bad that you absolutely cannot get out of the house if you have to, and when the snow comes, there's plenty for Jay to make a snowman or go sledding on a hill behind his school where all the children in the neighborhood gather. 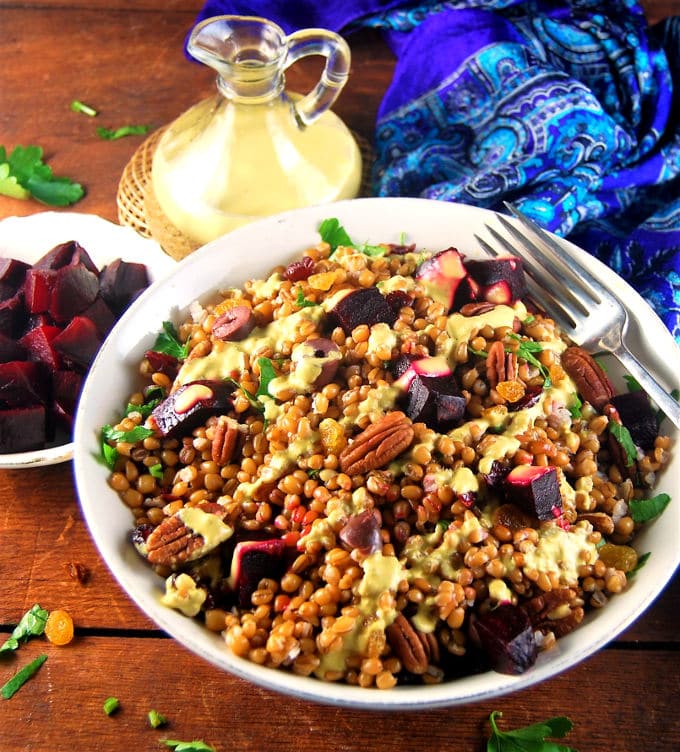 Jay has been moping around this year, asking when the snow will arrive. I don't have the heart to tell him, it probably won't.

I feel sorry for Leo and Lily too. Leo has never seen snow before, since he's just nearing the fifth month of his life, and Lily, who came to us from Puerto Rico, saw a very small amount of it when she got here last year, and she never quite took to it. It was strange, this white, freezing stuff lying on the ground that made one of her legs seize up a bit. But once they get used to it, I know Leo and Lily, like every other dog I've known, will grow to love snow. Especially Leo, with his thick fur. Lucy and Opie would play in it for hours. Lucy, tall, statuesque, and athletic, would cut a path through deep, two-foot snow with her lean, long legs, and Opie would follow, trotting behind her with that puppy-like walk he never quite lost. They would make snow angels, eat the snow, and slide around in it like it was the greatest thing ever. 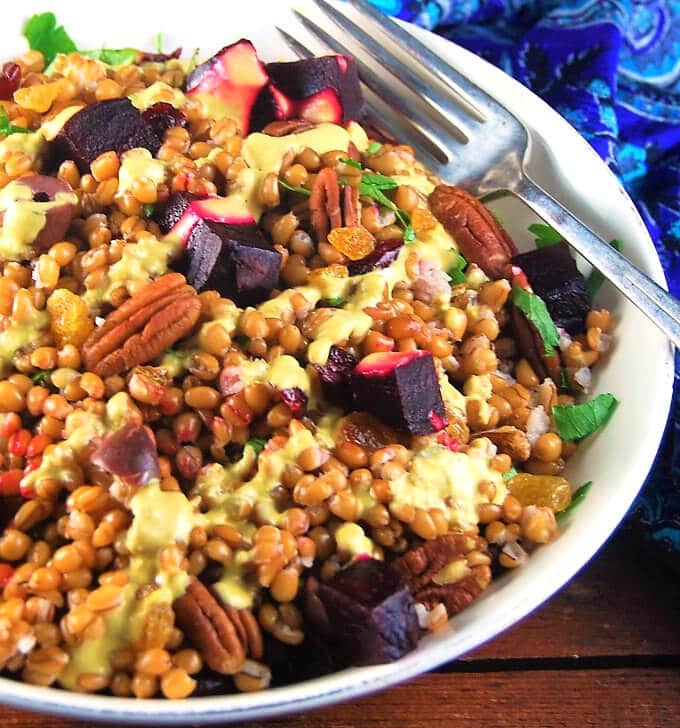 My cravings for food have matched the weather, and this week I finally broke out some wheat berries that had been sitting in my pantry for months to make a simple salad. I haven't shared a wheat berry recipe with you in a while, and that's really not right, because I love the little golden suckers with a passion. Cooked to the right consistency, wheat berries are nutty and slightly chewy with a texture that satisfies and a flavor that addicts. The last recipe I shared with you, years ago, was for a pilaf made with wheat berries, but this time I have for you something simpler but just as flavorful and satisfying: my Wheat Berry Salad with Roasted Beets and Curry Cashew Dressing.

To say this is a simple recipe is not quite true because, really, it's not a recipe at all. All you do is throw a few ingredients together and toss them in the flavorful dressing. The beets, roasted to perfection, are rich and meaty and tender and sweet. The pecans are crunchy and nutty. The cranberries are sweet and tart and hold on to the winter that never was. And the dressing-- a five-ingredient wonder of cashews, curry powder, turmeric, sriracha, and lemon -- is good enough to eat out of the blender by the spoonful. 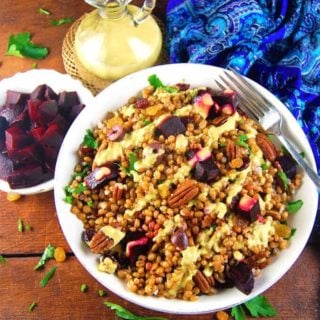 For the curry cashew dressing: