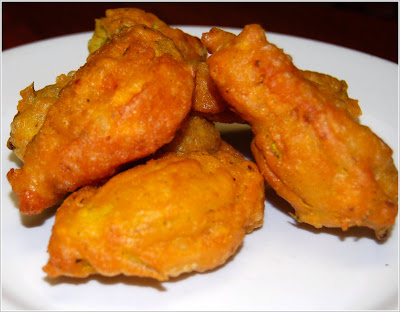 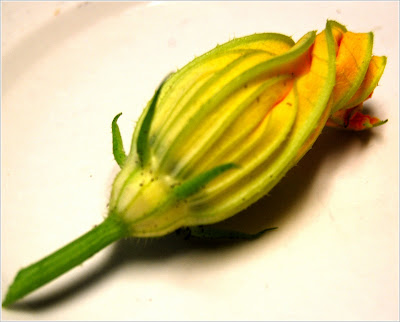 If there is one word I hate in the English dictionary, it has got to be the word "normal."

Normal is the word that's tacitly bandied around in front of us all day, every day, from the moment we're born. Act normal. Think normal. Be normal so everyone will like and accept you.

But normal is boring. Normal is what makes us a world where we all want to be like someone else, so we all end up being the same. And where's the fun in that?

Instead, give me unusual any day. Or extraordinary, odd, eccentric, weird even-- anything other than normal, so long as it doesn't cross over into evil or harmful. After all, it is those unusual, eccentric, odd people who make me wonder, make me curious, make me want to know what ticks in their heads.

Over time, they are also the ones we remember once time and space has washed away most memories of those who were, well, normal.

I have been lucky enough to come across my share of ordinary people who were anything but normal.

Like David, a homeless wanderer who sometimes sauntered into our neighborhood every once in a while when my brother and I were little children. The adults whispered David was "mad," meaning he didn't think like them, I guess, but we kids loved him and looked forward to his visits with all the curiosity we had in us. The minute someone spotted David, the word would spread fast and all the kids in the neighborhood would gather round him. He would regale us with fantastic stories and play air guitar and have us laughing harder than any other adult ever could or did.

There was Kohinoor, a fellow journalist I met at a newspaper I worked at in Bombay, the Independent. She was quite unlike any person I'd known, because she was so at peace with herself. She didn't try to look like the other journalists, she didn't act like them, and she spoke only when she had something to say. But she was smart and she wrote beautifully, and when she left to get married and move to another city, I remember, I missed her more than I've missed friends I've known much longer.

Or Dennis, a close friend of Desi's and later mine, who is perhaps one of the most unusual people I've ever met. He was loyal and generous to those he cared about, but he didn't think he had to live by the rules. He would give you every last penny he had if you needed it, but he wouldn't stand for someone telling him how to live his life. He was as different from Kohinoor as one can possibly imagine, but he was-- in a strange way-- not unlike her, in that he didn't seem to spend any time worrying about being liked and accepted by the rest of the world. There were a lot of people who thought he was crazy and often said so, and perhaps he was, but he also is one of the most memorable people I've ever known.

I thought about the word "normal" because these past few days, since Michael Jackson died, it's been used so often by the media. He was a great artist, they all say, but if only he'd been normal... Well, I, for one, am glad he didn't fit into a word as restrictive as normal, or he perhaps wouldn't be the genius he was.

So here's to not being straitjacketed into "normal." To being ourselves, and to looking for those things in life that make us truly happy, regardless of how we appear to the rest of the world, so long as our actions don't hurt others.

Today's recipe for Zucchini Flower Bhujias or Pakoras is something I thought of making after watching all those beautiful bright-yellow blossoms on my zucchini plants dying unsung, even as I waited for the zucchini fruit to arrive. I had heard you could eat the flowers but had never cooked them before. I looked up some recipes online and came across a few southern-style recipes for zucchini fritters dipped in batter, then deep-fried.

Since pakoras or bhujias are nothing but Indian-style fritters, I thought I'd use a pakora batter for my zucchini flowers.

I love anything deep-fried, but these pakoras were a joyful surprise. They cooked up light, fluffy and simply delicious-- a perfect teatime snack for a Sunday afternoon.

I served these with a chutney similar to this one. 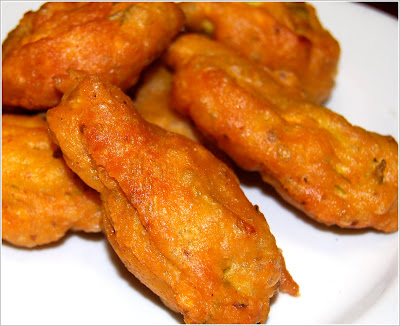 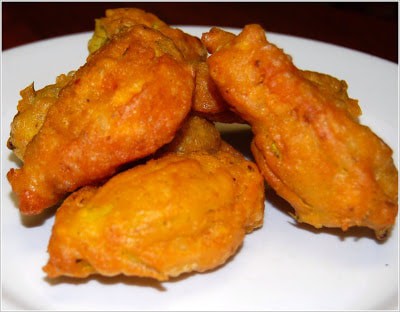