Who doesn’t love pizza, and we vegans are no different. But it can be a little harder for us to order takeout because even vegetarian pizza is usually covered wall to wall with thick gobs of cheese. 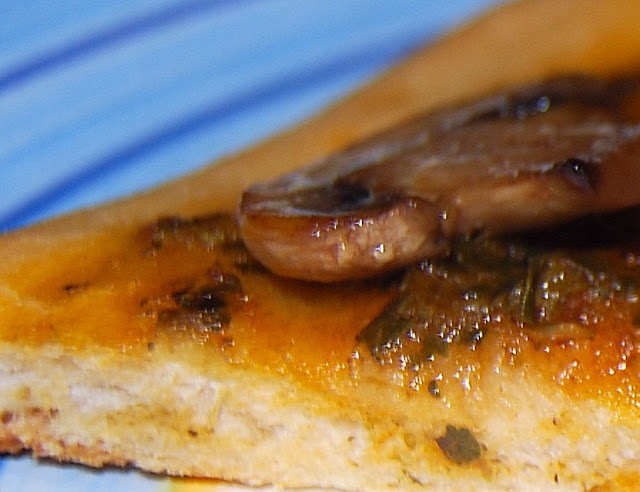 I do say a little harder: it’s really not that hard if you live in an urban area. There is at least one great pizza chain in my neighborhood, Z Pizza, that has a number of great vegan pizzas on their menu, and in stores like Whole Foods and Trader Joe’s I can usually find at least one or two varieties that are vegan.But making one’s own pizza has got to be more fun than any takeout or store-bought pizza any day. And it really isn’t hard to put together from scratch, nor does it take very long. In fact, we have waited longer for the delivery guy on a Friday night.I have two basic crust recipes: one for a thin crust and another for a regular one, and in the past I’ve experimented with making whole-wheat crusts, whole-wheat-pastry-flour crusts and plain all-purpose flour crusts. For someone who doesn’t like all-purpose flour, it hurts me a little to admit that the all-purpose does make the best-textured crust, although not the best tasting. And let’s face it: half the fun of the pizza (or maybe all of it) lies in a chewy-yet-crispy crust. 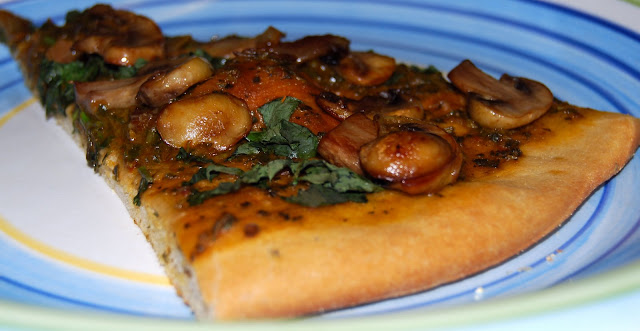 I’ve had my share of pizza oops, although not disasters because they were still edible. While trying out a whole-wheat crust once, loaded with too many mushrooms, the crust turned soft although it still tasted pretty good. The mushrooms, which express too many juices while cooking, were, of course, the culprit. I guess at this point all of you must be going, she didn’t figure THAT? Umm…guilty.

I still like a lot of toppings, but when I make a pizza now, I usually bake the crust and cook the toppings (if they need cooking) separately, and then bung them together in the oven for just enough time for them to get to know each other.

Basil is one of my favorite pizza toppings, and I decided to make that the chief flavor ingredient. I used it three ways: dry basil cooked into the crust, a vegan basil pesto sauce spread over the pizza instead of the usual tomato sauce, and basil chopped and sprinkled all over the crust close to the end of cooking. Sounds like a lot, but it was just enough of a basil hit for me. Divine.

I also caramelized the mushrooms and onions in white wine. If you’re making this for kids and would prefer to leave out the wine, do so by all means. I like the sweet fruitiness the wine adds, and it builds up the flavors.

For the crust, white whole wheat flour. I did mix in some all-purpose flour, but using at least part white-whole-wheat blunted the guilt as I gorged down slice after slice.

It’s all gone now, but I wish I had some more. 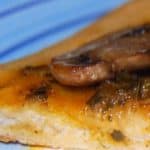 For the crust (recipe makes 2 crusts)