A delicious and easy curry that combines vegan chicken strips or seitan with lentils and spices. Perfect with rice or roti for a weeknight dinner.

Like many cooks, I've collected a decent number of cookbooks over the years. And when I went vegan, most of those cookbooks -- meant for an omnivore's palate-- began to taunt me with their uselessness.Thick compilations of antique recipes picked up at yard sales-- recipes stirred up by 1920s housewives in their own kitchens or passed down by their moms, generously donated for the church benefit. Classics like Julia Child's Mastering the Art of French Cuisine. Modern time-savers like Mark Bittman's How to Cook Everything and Rachel Ray's 30-Minute Meals. And just ones I had relied on each day in my kitchen, first as a novice and then as a more experienced cook, like the incredible Joy of Cooking.

If you've read my blog for any length of time, you know I hate waste. Just as much as I hate giving away a cookbook. And there was a good reason I bought some of these cookbooks and kept them-- the great recipes they offered. So instead of just letting go of my modestly impressive collection I learned, over time, to put them to good use: by veganizing them.

It didn't always work. When I tried making beignets from the Joy, the dough fell apart in the frying pan, the egg replacer I used just not strong enough to make up for the egg it replaced. Another time I naively (read stupidly) tried to substitute tofu in an angel food cake and ended up with a moist, dense, albeit delicious slab that didn't rise but one inch and didn't taste anything like an angel food cake.

Lucky for me, there were more successes than failures. While baked goods can be the most challenging to adapt, I've been able to veganize a kitchenload of baked goodies -- especially ones that I've adapted from Joy-- that I've shared with you over the years on this blog, including my Vegan Whole Wheat Challah Breadand my Vegan Shortbread Cookies

The stews and curries-- the cooked goods-- were far easier. While I usually use vegetables to replace meat in most dishes, the easy availability of meat substitutes doesn't hurt.

The recipe I have for you today is a version of a chicken-lentil stew with Indian spices that I adapted from a slim and tall cookbook called The Book of Curries and Indian Foods.

I used to love this stew because not only is it delicious, but having grown up in a home where meat was never combined with lentils into a single dish, the whole concept of throwing these two protein powerhouses together seemed both enthralling and enticing. In fact, the only Indian dish I can think of even today, which combines meat and lentils, is the delicious Dhansaak-- a dish from the Parsi community.

To replace the chicken in my stew I used vegan chik'n strips which did a good job and held their own in the curry, although they did get a little softer than I'd have liked them to be. Next time I might try adding them later in the cooking process so they don't stew as long with the lentils.

The spices are what really make this dish work. They flavor the chick'n and the dal subtly yet assertively. I love this with some rice.

If you'd rather not use a meat substitute, go ahead and use a vegetable instead. Potatoes, mushrooms or even eggplant would be great in this. 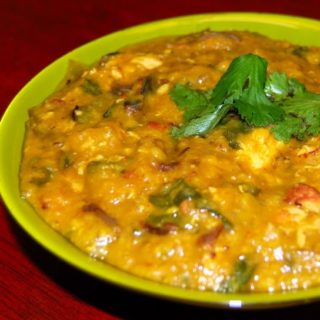