My delicious vegan Goan 'Sausage' Curry has all the flavor of this beloved dish from Goa, but without the pork. It's also soy-free, nut-free and gluten-free.

I can't claim to be Goan, but I have a near-umbilical-cord relationship with this beautiful state on India's west coast because it's where my stepmother was from. I grew up eating Goan food, went there during summer holidays as a child, had tons of Goan uncles, aunts and cousins, and could speak "Goan konkani" like a native.

Goa is a land that's easy to love. Part of its appeal, which draws millions of local and international tourists in year after year, is its unique natural beauty: Goa is India's tiniest state, but its long west coast hugs the Arabian Sea, which means no matter where you are in Goa, you are never too far from a beach.

But for me, Goa's appeal lay not so much in those beaches -- I was no stranger to the sea being a Bombay girl -- but its brilliant greenery. In fact, the first thing you notice about Goa as you fly in is that rich green extending all the way to the edges of the land where the frothy waves roll to the shore.

This is a land of thick forests where everything from coconuts to mangoes and jackfruit grow abundantly. On one memorable day, my aunt, Vilas maushi, took my brother and me to visit a friend's orchard in Salcette. Cashew trees grew wild along the street as we walked to the bus, and we happily picked the juicy orange fruit with their silver-gray nuts and gorged on them.

Once a Portuguese colony, Goa has a large Catholic population. Beautiful old churches like the Basilica of Bom Jesus are as much at home here as are the domes of the Mangeshi temple. This diversity also results in two distinct local cuisines. The Hindus and Catholics rely largely on the same ingredients that are easily available here -- fish, rice and coconuts being the chief among these -- but they cook them up in very different ways.

I remember my stepmother cooking a lot of fish, and sometimes chicken and mutton, but one meat that she would never touch (besides beef) was pork. Not for any religious reasons -- I don't think meat-eating Hindus have strong feelings one way or the other on eating pigs -- but just because most Goan Hindus, or Hindus anywhere for that matter, simply didn't eat pork.

There were exceptions, like her brother and my dad who, on our visits to Goa, would sometimes buy pork sausages, called choris or chouriço, that are a Catholic specialty. The men would chop them and cook them into an easy, spicy curry that they'd scoop up with pao, pillowy bread rolls, and a glass of Goa's famed, moonshine-like cashew liquor, feni. For once, the women stayed out of the kitchen, heads shaking and shoulders shrugging in disgust. Their disapproval only had the effect of enhancing the men's enjoyment of the food, while we kids squealed with laughter.

Choris is made by mixing pork with a number of Indian spices, but what really gives it a distinct identity among Indian sausages is the fact that it uses local toddy vinegar, drawn from coconut palms.

Many Goans would raise their own pigs, and one of the most horrifying sounds I remember hearing in my childhood is of a pig being taken to slaughter by someone in my Goan uncle's neighborhood. The squeals of that poor animal gave me nightmares for years to come, and I can still hear them decades later.

Today, pork production is an even more inhumane business because of factory farming practices like the stifling gestation crates used to house mother pigs. But as we vegans know, killing animals for meat is not just cruel but unnecessary in a time when meatless meats are so easily available, with more coming on the market every day. Even better, meatless meats are far better for you because they don't come with the animal cholesterol.

And the foods you can make with them! Like this vegan Goan Sausage Curry.

A Goan Sausage Curry is a study in how the simplest of foods can be the most exquisite. This is an incredibly basic dish, with no crazy ingredients.

For my vegan Goan Sausage Curry, I used Beyond Meat sausages, but before I added the sausage to my recipe, I infused it with paprika, turmeric, ginger, garlic, cinnamon and vinegar, the exact spices a Goan cook would use to make choris. This extra step sends the flavors of this curry skyrocketing, and keeps the actual dish as close as possible to the real thing, flavor-wise.

What to serve with this curry:

In Goa, you'd scoop up this curry with pieces of a local bread roll called a pao or pav. You can find my recipe for pav here, but a burger bun works just as well if you'd rather not go to the trouble. For Jay, I pile the curry into a bun and he eats it up like a sloppy joe.

You can also serve this curry over rice -- in fact, it's delicious that way.

Ingredients for a Goan sausage curry: 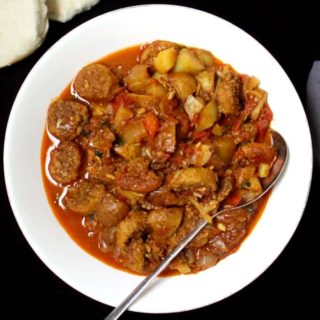