A creamy curry of pinto beans and vegan sausage in a creamy coconut-tamarind sauce, this vegan version of a Goan Feijoada is comfort food at its heartiest.

My Goan stepmother is a talented and adventurous cook. The last time we were visiting with her and my dad in Goa, she pulled out some pink beans from her pantry and introduced them to us as "Portuguese beans."

While Indian cuisine is rich in all sorts of beans and legumes, pink beans are not something I had ever encountered before in India (although I always have them in my pantry here in the United States). No wonder my stepmother was proud of her find. She used them that afternoon to cook up a delicious, coconut-based curry very much like this Feijoada I have for you today-- a dish Goa adopted and adapted from its Portuguese colonizers.

Half a century after the Portuguese left Goa, their memory lingers on. You can hear it in the names of Goans and in their language, see it  in the beautiful churches and buildings that dot the landscape, and taste it in Goan cuisine which includes dishes like Xacuti, Balchao, and Vegan Vegetable Vindaloo.

The food of former colonies like Goa offers an interesting study in how occupiers cross-pollinated culinary traditions across the distant lands they held. Those food legacies were readily embraced by the natives and they persisted long after the occupiers left, as opposed to other colonial legacies that were unwelcome and are deliberately erased or lost over time. The names of cities, for instance, are easily changed back to what they used to be, and political forces even attempt to rewrite history books to put a spin on events. But connections forged through food linger and are embedded unshakably within cultures, impossible to erase. In fact, who would want to?

People here in the United States might recognize Feijoada as a meat-and-sausage stew that is often referred to as Brazil's national dish--yes, the Portuguese took it there too. But the Goans added to their version the signature ingredients of their own cuisine, like coconut, tamarind, and warm, fragrant spices. The result was a delicious stew that's easy to veganize without losing an iota of flavor.

My stepmom's version is entirely vegan, although I added some vegan sausage to my translation for two reasons: the traditional Goan Feijoada, cooked usually by the state's Christian population, does contain pork sausage. Second, I just wanted more protein in my curry. You could leave out the sausage if you wish and the stew would be no less delicious. 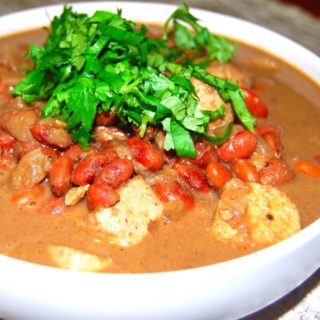