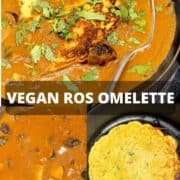 With a brazenness typical of Indian street food, Goa's delectable offering of Ros Omelette combines two completely different but tasty foods -- an omelet and a spicy curry -- to multiply the deliciousness many times over. In my vegan -- and healthier -- version of a Ros Omelet you'll never miss the eggs, and you'll be licking your fingers to stubs.

In India's smallest state, Goa, you will find some of the richest and most diverse food traditions anywhere in the country. This includes a thriving street food culture with offerings that are quite unique, from crunchy croquettes to choris-pav, a sausage and bread combination, to bebinca, a layered, sticky sweet made with coconut milk and eggs.

One of the most popular among these street eats is Ros Omelette, a delectable fusion of an omelette and a spicy Goan curry made with coconut and spices.

In Goa, which is my stepmom's native state and one I unfailingly gravitate to each time I visit India, you would find Ros (pronounced "ross") Omelet being sold outside railway stations at "gaddos," as makeshift food stalls and trucks are known here. For travelers and workers in nearby buildings the gaddos are a welcome convenience: they dish out tasty fast food at extremely affordable prices and without the long wait you might expect at a restaurant.

I wanted to share this vegan and eggless recipe of Ros Omelette with you as part of my long-running series on street foods in India, and also because I like sharing with you veganized versions of Indian foods you will likely never find at an Indian restaurant, but are very much worth making and eating.

If you do make this Ros Omelette, be sure to let me know by leaving a comment below. Or take a photo and tag me @holycowvegan on Instagram. I'd love to know!

What is Ros Omelette?

In a Ros Omelette, an egg omelet, made Indian style with shallots and chili peppers, is served dunked into a spicy gravy (called "ros" in Goan Christian Konkani, "ras" in Goan Hindu lingo). The gravy is usually chicken or mutton xacuti (pronounced shaa-koo-ti), another popular Goan dish that derives from the state's colonial Portuguese past, and it is packed with flavor and texture from a mix of spices and coconut. It is a simple but rather a genius idea, as so much street food is: you take two very different but very tasty foods, combine them, and multiply the deliciousness several-fold.

Why you will love this dish

For the vegan omelet:

For the xacuti "ros" or gravy:

The spice ingredient list is long. Can I use garam masala instead?

The short answer is yes, but there's a rider.
While many of the ingredients here can be found in a garam masala, the proportions are all quite different. Garam masala also doesn't usually have poppy seeds added. For an authentic taste, it is best to make this recipe from scratch. But if garam masala is all you have or are willing to use, you can add about two tablespoons of it instead of the other spices. Add it to the blender along with the tomatoes and roasted onions. As garam masala is pre-roasted, you don't need to roast it again.

How can I store the ros omelet?

You can refrigerate the ros or curry for up to four days, and freeze it for longer periods.
Make the chickpea omelet batter fresh, however, as it doesn't keep well for longer than a day. Also don't precook the omelets--make them just before serving. They hardly take any time to put together.

How to make ros omelette 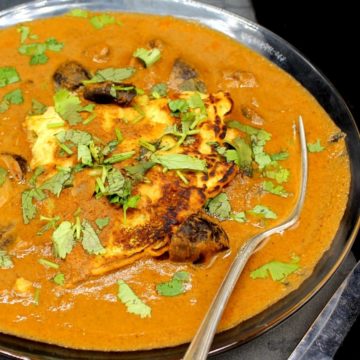 For the vegan omelet

For the vegan xacuti gravy