Rogan Josh is a sumptuous dish, usually made with lamb, that evokes the magic of Kashmiri cuisine. In this vegan Rogan Josh made with tempeh or tofu you won't miss the meat but you will definitely be asking for more!

There are few dishes that evoke the tempestuous passion of the land they spring from as perfectly as Rogan Josh does.

Rogan Josh, which roughly translates to "red heat," is a classic meat dish from the belly of Kashmir, an exquisite land infused with both sublime romance and turbulent tragedy. When I was growing up in the hot crush of Bombay, Kashmir was where everyone I knew wanted to go to on a holiday. It was the land of icy blue Himalayan peaks, majestic Chinar trees reaching for the sky, and beautiful women in ornately embroidered wool gowns. The land of houseboats sitting on the glossy, glassy Dal lake and of Bollywood heroes with puffy hair serenading their heroines in equally bouffant hairdos. Of fragrant musk, hot salt tea, and delicious saffron, the tiny red stigma of the saffron crocus flower that is so prized by cooks.

But by the late 1980s, Kashmir, situated along the nation's border and for long a subject of dispute between India and Pakistan, had morphed into a seething bloodbath. Terrorism -- and the inevitable military intervention -- turned the idyllic land into a violent one unsafe not only for tourists but for the hundreds of thousands of people who lived in Kashmir. Many fled the valley, setting up makeshift camps in the hardboiled squalor of cities like Delhi, Calcutta and Bombay, far from the heaven that had once been home. In the 1990s, I remember watching with sad horror as many of these camps sprouted up along the harsh, dust-smothered railway tracks of Bombay. Over the years since Kashmir has see-sawed between a nervous calm and sharp outbursts of violence. The terrorism has abated, but not completely so and many Kashmiri refugees remain in other Indian cities, still afraid to go home.

There is one more thing Kashmir has always been known for, apart from its breathtaking beauty and its unfortunate tragedies: its rich and distinctive cuisine. I have shared a few Kashmiri dishes with you in the past, like Dum Aloo, a saucy side dish that takes the humble spud to a whole new level of deliciousness, and these delicious Kashmiri collard greens.

Rogan Josh is just as special as these dishes, if not more so. Traditionally it is made with mutton or goat's meat--an ingredient Kashmiri cuisine tends to rely heavily on. But this vegan version for which I used tempeh cubes is just as delicious. You could also use vegetables like eggplant or mushroom instead of the tempeh, but I really prefer the chewy texture of tempeh in this dish. The recipe also calls for yogurt and I substitute that with some coconut milk and lemon.

Kashmiri cuisine also makes liberal use of a local chilli that is moderately hot and imbues dishes with a vibrant and appetizing redness. Because I don't get Kashmiri chillies at my local Indian grocery store, I chose instead to go with a Guajillo pepper, also a moderately hot chili that imparts a wonderful color. 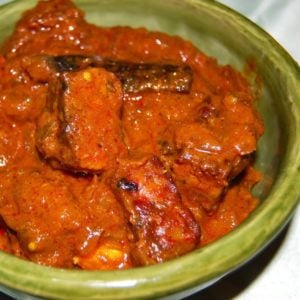