Jump to Recipe Pin Recipe
A recipe for fresh, green Saag Chana or Saag Chole, a blend of leafy greens mixed in with creamy garbanzo beans or chickpeas, and garnished with roasted potatoes.

We went to the animal shelter this past weekend to drop off bedding and blankets we had been collecting to donate for the winter. And Opie's medications, because he doesn't need them anymore and there were many, some unopened. I made Desi promise we would not go down into the basement area where the dogs are, because I knew he would want to bring one home and right now I just don't feel ready. But the minute we walked in through the door, it was inevitable. It was Jay who ran down first, followed by Desi, then me.

Animal shelters are a strange place, with their atmosphere of hope and doom. As a many-time rescue mom, and a once-foster volunteer, I have been in shelters many, many times, and they never fail to move me deeply. Most people who visit shelters say they are overcome by a desire to bring all the animals home, and it's certainly true. Desi and I have never been very picky about breeds and temperaments: in fact, we often asked for the dog who would be the least likely to find a home, and we were always amazed by the wonderfulness of the animals we adopted and how easily and happily they settled into their new homes, no matter their past. Now, with a child, we realize we need to be a little more careful about finding a dog who will not be alarmed by a rambunctious seven-year-old, but making a choice between all of those wagging tails and slobbery mouths is almost impossible, especially when you know that animals who do not get adopted after a certain period of time will very likely be euthanized. It's like Sophie's choice.

We had a great time at the shelter scratching necks, petting furry backs, and getting kisses, but for now, we are still without a dog. That could change soon, though. As much as we miss Opie, and as heavy as our hearts still are, there are many, many animals in shelters, and it just doesn't feel right for two animal lovers to turn their backs on homeless animals as we indulge in our grief. Afterwards, as I mulled over it, Desi reminded me that Opie had always loved other dogs, and had never been territorial with visiting dogs or foster dogs when they came to our home.

Something tells me that when we do adopt again, Opie will approve.

I have for you today a delicious and healthy recipe for Saag Chana or Saag Chole, a popular Indian restaurant dish made with leafy greens and chickpeas. There are many, many versions of Saag Chana out there, and many do not blend the greens, but I rather like giving them a chance to get all smooth and silky in the blender before mixing them up with the chickpeas. But there is texture too in this recipe, from onions and tomatoes, and, of course, the chickpeas.

Saag Chana is traditionally made with spinach, but I used some Swiss chard instead because I had some on hand, and it is quite possibly my favorite green to cook. Along with the leafy chard there's some mint and some coriander and a few spices to add incredible flavor. All of this goodness is topped off by crunchy roasted potatoes, an optional garnish.

As with most recipes here, this is an easy-to-make dish. And it doesn't take long to come together. Try it. You'll be glad you did. 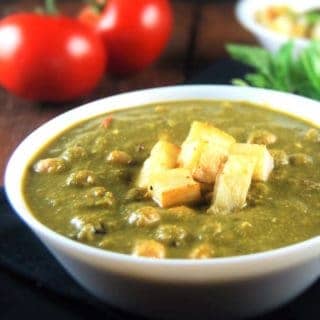