You are here: Home | Travel | South India: Life in Pictures 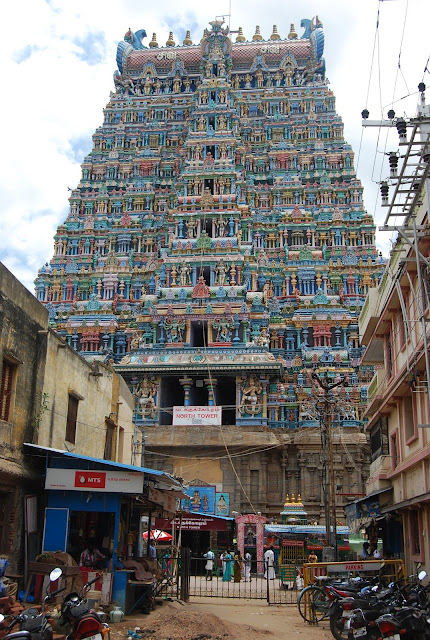 The Meenakshi temple in Madurai throngs with thousands of visitors who brave the intense heat and humidity for eternal salvation. The temple -- a huge attraction for tourists from within and outside India -- is itself a work of art, with gorgeous stone carvings of Indian dieties. All photography is banned inside the temple, except for photos taken on cell phones.

In Madurai, one of south India's biggest cities, peddlers beg visitors to shell out a few rupees for their wares just outside the 350-year-old Meenakshi temple, home to a towering pillar covered in nearly 200 kilos of gold. When they sense a sympathetic ear, most will tell you of hardships at home, like a sick mother or starving children. In India's temple city, as Madurai dubs itself, thousands of homeless cows -- an animal revered as holy by Hindus-- scavenge through piles of trash, looking for their next meal.

Indian life has always been beset with raw paradoxes, and in modern India the paradoxes are deeper and more divisive than ever before. Poverty is all around and so are glitzy shopping malls occupying multiple floors and chrome-and-glass dealerships for foreign cars. In their living rooms, the middle class are fixated on soaps and movies that couldn't be farther removed from the reality of their lives.

In the past week since Desi and I touched down in Bombay, we have had a whirlwind visit with family in Madras or Chennai, relaxed just a little in Kodaikanal-- a beautiful hill station in Tamil Nadu-- and tomorrow we leave for Goa to visit with my father. We will follow that up with a visit to Poona and end up once again in Bombay before we return home. For those of you who enjoyed the pictures of Bombay I posted, I will have more soon.

As we do every time we visit, we have been reabsorbing India which has been metamorphosing by the moment since we left the country 17 years ago. This time, after nearly two decades, I visited the apartment complex where I grew up, in Andheri, a suburb of Bombay. When the cab dropped us off at one of the only landmarks in the neighborhood that still remained from my childhood-- Apna Bazar, a local supermarket chain-- I was lost. In front of the building where I grew up were wide streets and a huge playground where children played football in the evenings and learned how to bike. Today, the park has been replaced by a tall apartment building, cutting out the sunlight and, it seems, the air for the older, shorter buildings that surround it. There is barely room to walk, leave alone play. Even a shopping mall has been crammed into what was once a cozy neighborhood. 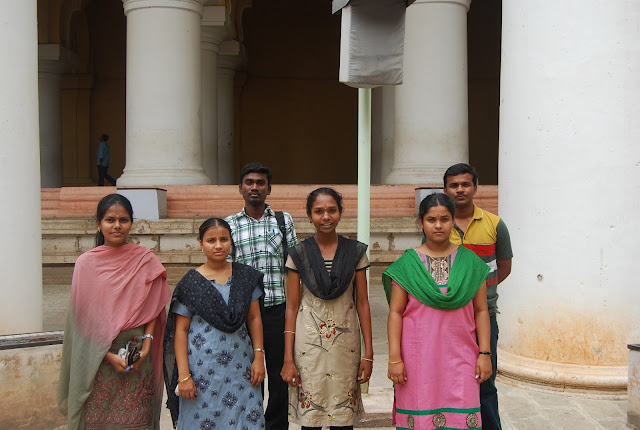 A group of college students in Madurai ask to pose for our camera.

But there are other things about India that don't change. People still retain an innocent, hospitable charm. A reader asked me how people on the street react when we photograph them. In many countries we have traveled to, Desi has been waved away angrily by people reluctant to become subjects of his camera. But in India, no one minds-- in fact, people will sometimes ask to be photographed, considering it an honor. If a stranger eats in your presence, he or she will never do so without offering you part of the food. And if you ask for directions, chances are they will walk all the way with you to your destination, not for reward but because that's how you treat guests in India.

I will be back next with pictures of some rare fruits we encountered in Kodaikanal, along with other beautiful sights. Until then, I leave you with these pictures of life in Madurai. 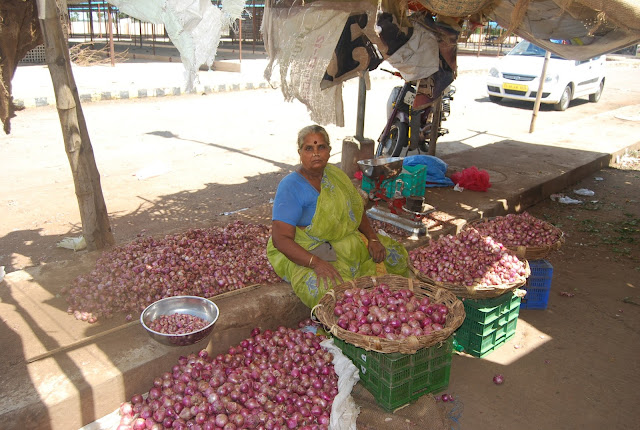 Selling shallots at the vegetable market 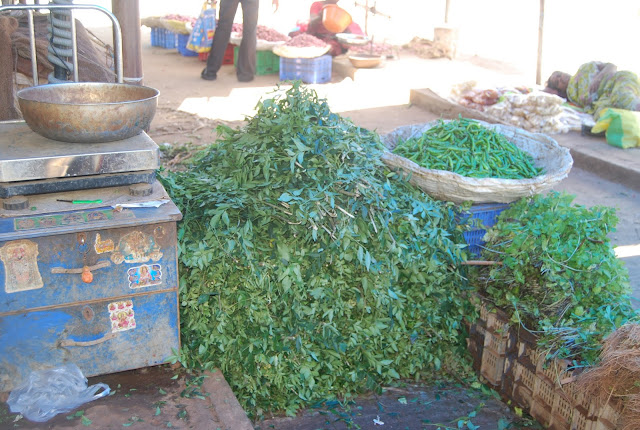 At the Madurai vegetable market, a huge pile of curry leaves, a popular seasoning for south Indian curries, along with green chillies and coriander leaves 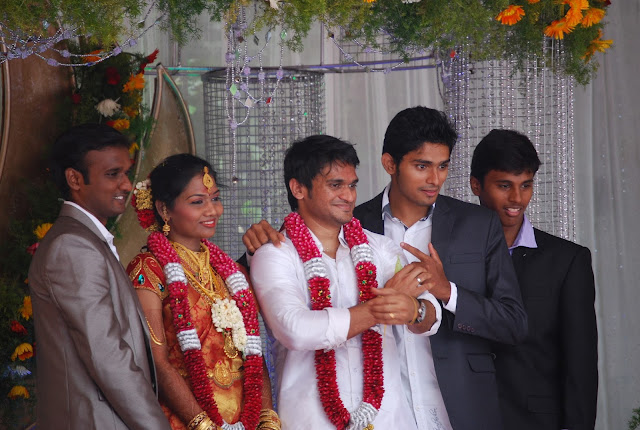 We landed in Madurai on what turned out to be an auspicious weekend for getting hitched. Weddings were on all over the city, including one right in the hotel where we stayed. Look at the radiant bride, decked out head to toe in brilliant gold, including her hair (below). 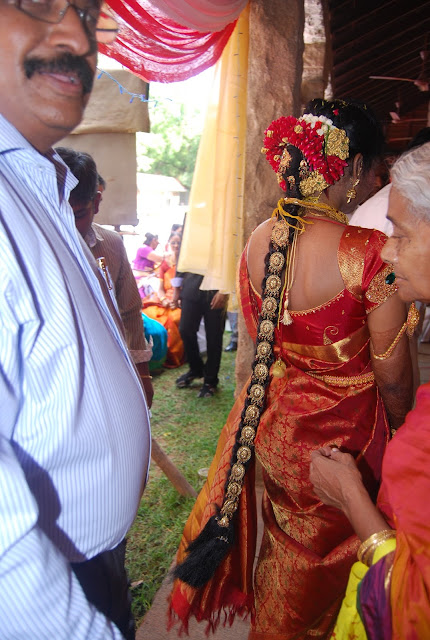 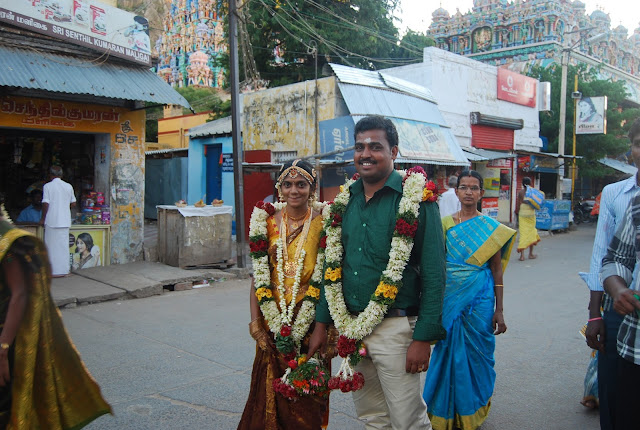 A just-married couple exit a temple after their wedding ceremony. 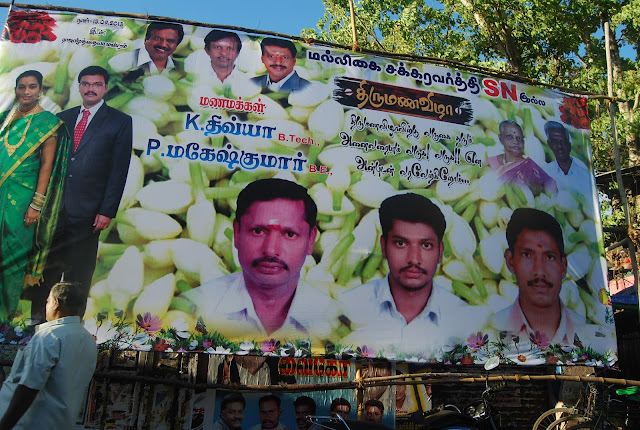 Posters announcing weddings, like this one, are posted all over Madurai. Everyone is invited. Really. 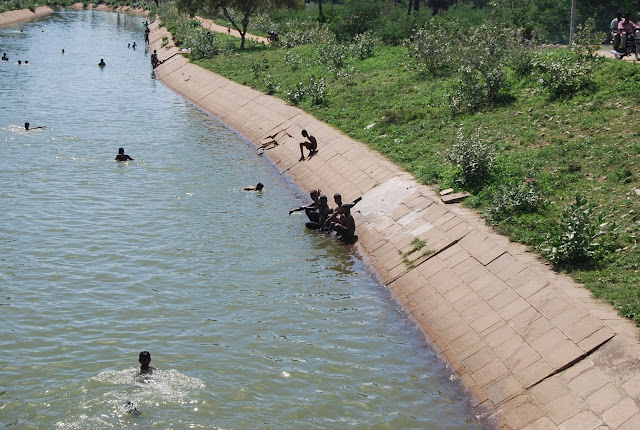 Teenagers cool off from the intense heat at a canal just outside Madurai. Many posed for the camera, showing off their expert diving moves. Below, one swimmer does the Bolt. 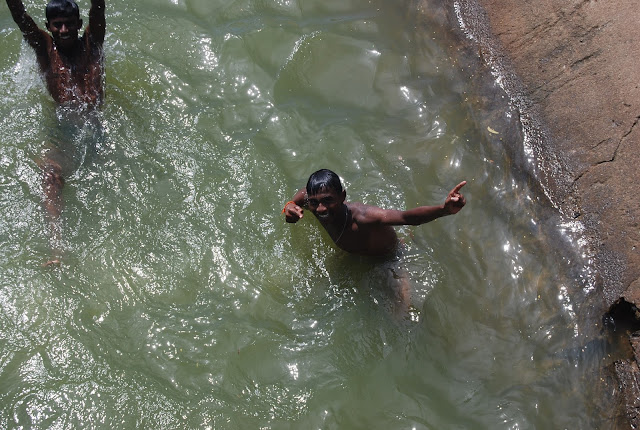 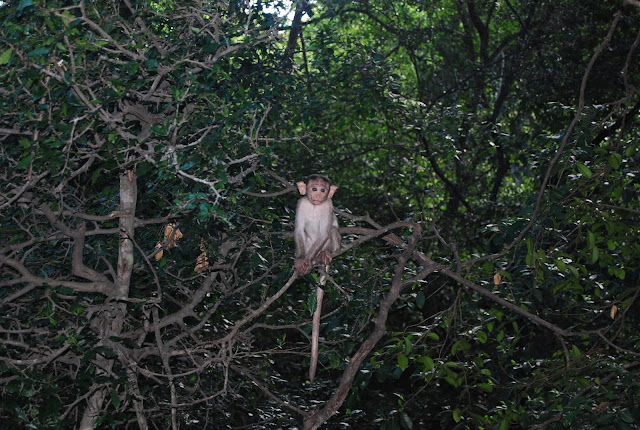 Monkeys can be found in green spots around Madurai, including this cute baby near a temple. 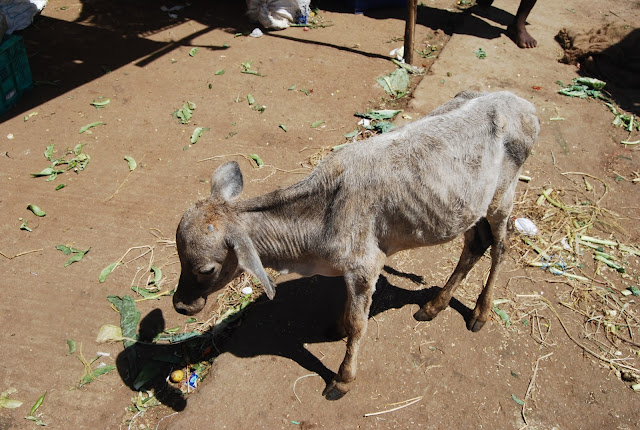 A skinny calf looks for food near the vegetable market.