Here's a way you can have your donut and eat it too: these perfect Baked Apple Pie Donuts with a bright, tart-sweet glaze of apples and maple syrup mixed in with the comforting warmth of cinnamon, nutmeg and ginger.

I am not a donut person, although I can't say the same for the rest of my family. The last time I ate a memorable vegan donut was probably at Voodoo Donuts in Portland and that was a few years ago. Sometimes, I have satisfied the cravings of my little kid and the big one by making donuts the old-fashioned way: by dunking them into a bubbling pot of oil, all the time mumbling and grumbling because I felt like a horrible person trying to kill my family with my cooking.

Until I picked up this nifty little baking pan at the store and my perception of donuts changed forever.

I don't usually buy fancy baking gear, and most of the stuff I have -- pretty and plain -- comes from thrift stores. But how could I resist the donut baking pan? I can now make fairly healthy donuts (does that sound like an oxymoron or what?) for Jay and Desi and feel like a saint. There's even a pan available for making teeny little donuts -- it's so cute, you will just want to take it home and cuddle it.

These baked apple pie donuts are truly amazing: moist, sweet, and so tasty that it could be hard to rein yourself in with just one. In which case, try making them in the teeny pan instead of the regular one. Easy portion control!

I can't think of a better way to welcome Fall. 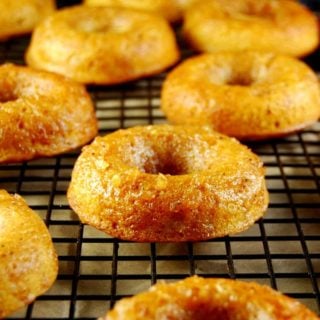