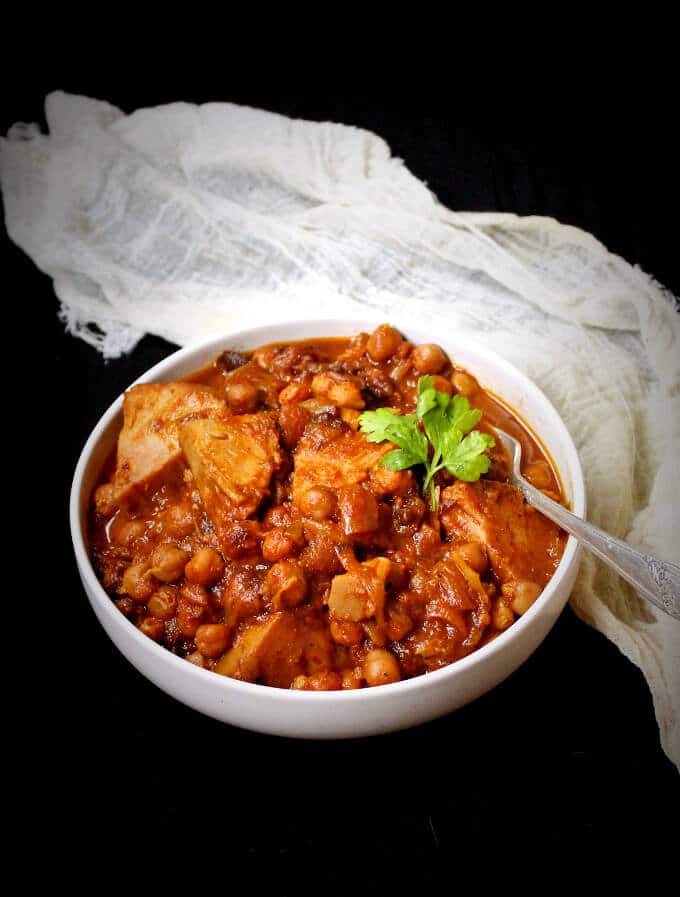 There are many good reasons to eat a jackfruit, and its rather recent status as a meat substitute is not, to my mind, the chief one of them. I grew up eating jackfruit in my Indian home, and it was, in itself, always a special occasion. This is a delicious fruit, with a brilliant flavor that combines the tastes of some of the most beloved tropical fruits from mangoes to bananas, and well worth waiting for during the few months it is in season. Besides, hacking into the large, thorny orb to get at all that golden goodness inside was always a huge job deserving of a celebration. 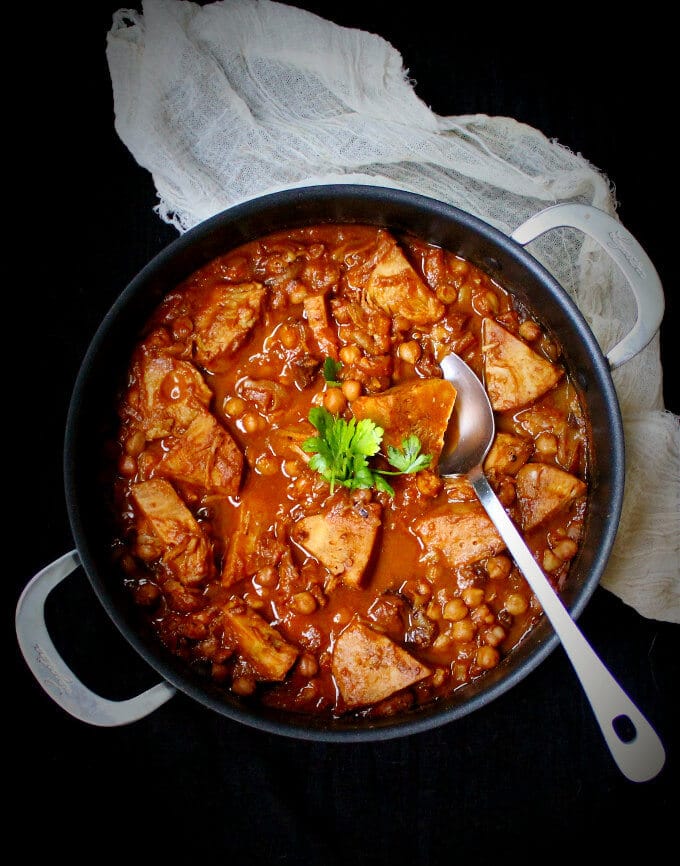 In the Konkan region of India, where my parents come from, jackfruit trees are a common sight. In summer, the large, greenish-brown orbs with their unattractive, spiky skin, hang in bunches from tall trees. The fruit can grow so huge, there are legends about four-food-wide jackfruit that weigh a hundred kilos. I've never seen one that big, but I do remember looking up and wondering how objects so large and so heavy could stay suspended on their slim, brown stems in defiance of gravity.

Every summer, my parents would look forward to visits from any relatives who would brave crowded trains and buses to bring them a jackfruit, all the way from Karwar or Goa. If we happened to actually go there for the summer holidays, even better. Not because jackfruit wasn't available in Bombay, but because the jackfruit from their native land was a little more special to my parents. It simply tasted better.

The job of cutting the fruit usually fell upon my father who would oil his hands and sit astride a wooden plank with a huge blade attached to it, called an adoli (you can see a picture of an adoli here). The oil made it easier to later wash his hands off the sticky sap that oozed generously from the fruit. He would then carefully cut the large fruit down the middle, so the edible segments inside were visible, and then he would make another cut, so they were accessible. He'd get some assistance from my mom or another adult who would, also with oiled fingers, help pull out the golden bulbs with their large, brown seeds. After the seeds had been removed (to be boiled and consumed later-- they were also delicious), we'd all dig in for a tropical feast like no other.

The jackfruit you cook with, though, is not this ripe jackfruit that tastes like heaven, but rather the raw version that is usually available here in cans. This was the type I used for my Jackfruit "Lamb" Tagine. 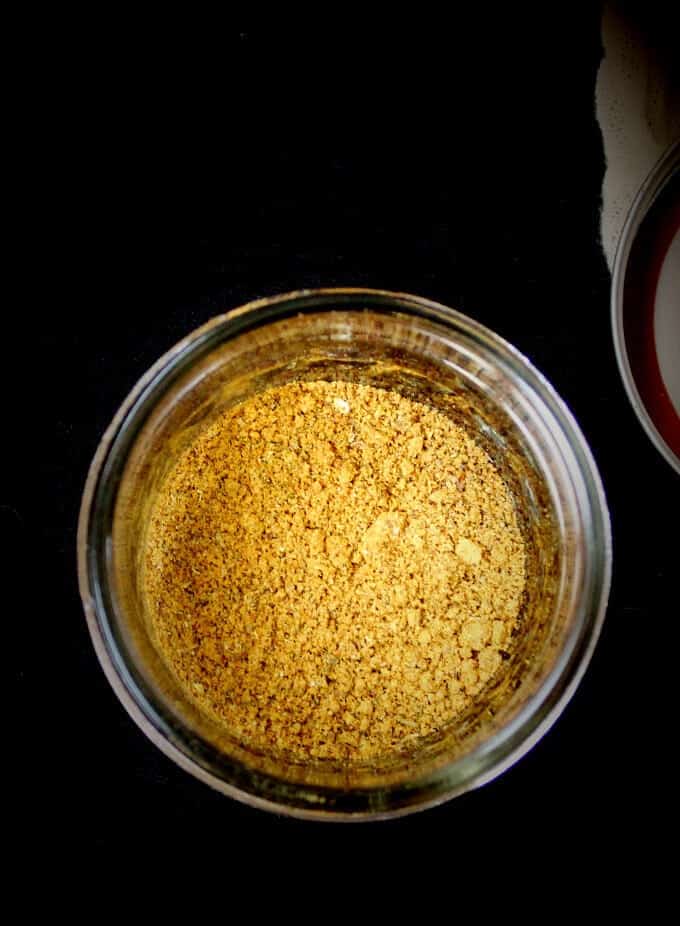 This is a rather luxuriously prepared dish, but your hands-on time is minimal, so don't worry you'll be stuck over a hot stove for an hour or more. Most of the cooking happens inside the oven. But the slow cooking adds amazing flavor, giving the spices -- and the apricots and raisins -- plenty of time to marry each other and get really happy. Because jackfruit does lack one quality as a meat substitute -- protein -- I added some chickpeas, also a very Moroccan ingredient, to the tagine.

I rather fell in love with this tagine. It's rich and delicious and served on a bed of couscous, it makes for a rich, satisfying, and hearty meal. The jackfruit cooks up tender and delicious and absorbs the spices beautifully.

Jackfruit is given superfood status in India: it is rich in fiber and vitamins, packed with antioxidants, and it is extremely heart-healthy. Indian nutritionists point to its abilities to reverse aging, lower body fat, and improve thyroid function. Now if that isn't enough reason to put down your golden turmeric latte -- just until you take a mouthful of this Jackfruit "Lamb" Tagine  -- I don't know what is. 😉 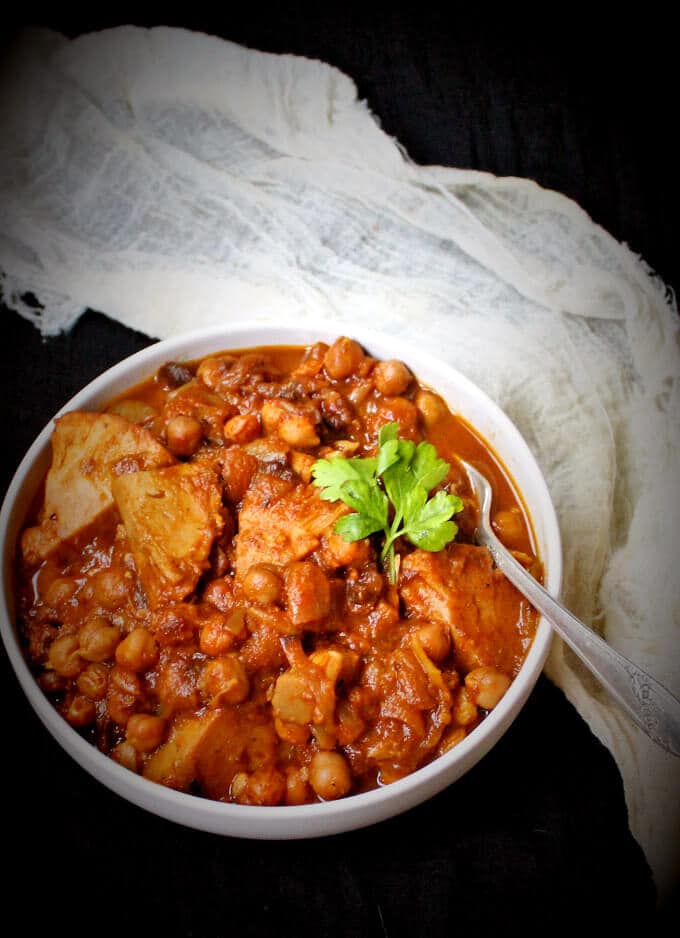 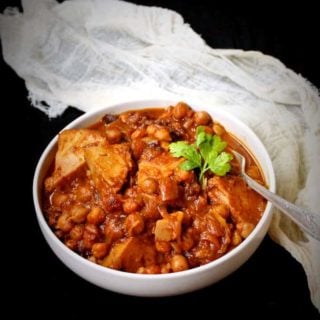