This delicious and summery Vegan Peach Berry Pie is the perfect vegan dessert. The goodness of three kinds of berries and peaches is encased in a golden vegan pie crust. A nut-free and soy-free recipe.

I love baking up a pie for the Fourth because I can make it in advance, and there's never a better time to bake a vegan Peach Berry Pie than when the markets are overflowing with berries of all colors and ripe, juicy peaches.

Besides, who doesn't love pie?

At our home, a pie goes down fabulously, no questions asked. While an apple pie, like this Vegan Skillet Apple Pie is Desi's favorite, he pretty much adores just about any fruity pie, and so does Jay. So when I find myself with more fruit on hand than we can eat fast enough, I put it into a jam or a pie and I can be sure that it will disappear -- fast.

I used a mix of berries in this vegan Peach Berry Pie: blackberries, strawberries, and blueberries. You can use any combination -- I wish I had raspberries, my favorite berry, on hand, although I'll admit that when I do, I much prefer to eat it on its own because there's nothing in the world that compares to that flavor.

We have a raspberry bush -- and a blueberry bush -- in the backyard but we've pretty much given those over to the birds who rarely leave anything for us behind. We have some eight bird feeders in our small, urban backyard and several families of birds living under the eaves and in the trees, and each time Jay -- whose job it is to fill the feeders -- puts them out, the birdseed is gone in hours.

We have plenty of other wild visitors too, including a few outdoor cats. Recently, Georgia and Canoli, who have been living in our neighborhood for years, were joined by an incredibly friendly black cat with bright green eyes. She is eartipped, which indicates a spayed outdoor cat, but when I go into the yard with the cat food most evenings, she will happily run to me, rub herself against my legs, and demand that I give her a good scratch behind the ears. I've been thinking of getting her into the house, although Lily, Leo and Billy might take some convincing.

There's a fox who sometimes tries to beat the cats to the food, and the other day, coming home late one night, Desi surprised a raccoon who was patiently waiting on the front stoop for us to put the cat food out.

The deer come by too, sometimes, and they munch on the lilies and the hostas almost as soon as they begin to bloom. A small piece of woods not far from our home was recently razed to widen a road, and as a result a handful of deer who called it home have now been pushed out to heaven knows where, but we still see some occasionally.

But coming back to the pie, which you're really waiting to hear about, this is a recipe you're going to be happy you tried. It's really simple and easy as pie, and although turning on the oven in the summer seems a burning pain, you turn on the barbecue in your oven-like yard, don't you?

If you make this Vegan Peach Berry Pie, be sure to come back and tell me about it. Or tell me about your wild visitors. How boring would our world be without them?

And for the Fourth, be sure to bring your pets in and keep them safe during the fireworks. Lily and Leo are pretty cool around all that noise, but my big ol' Lucy would tremble like a leaf when the fireworks started, and they do scare many dogs. Remember, they can hear better than you and me. 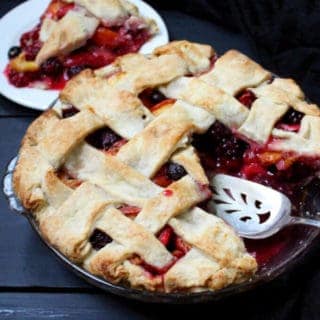