These Vegan Sourdough Waffles are light, airy, crunchy on the outside, whole wheat, and absolutely divine. Serve with fruit or maple syrup for a delicious breakfast.

Here's a recipe for Vegan Sourdough Waffles so crisp on the outside, so fluffy on the inside and so delicious all around, you'll probably never want to make any other kind ever again.But first, here's something that's on my mind, as mom to a former outdoor cat (my sweetheart Billy) and to two ferals (Georgia and Cannoli) who come by to eat on our front stoop every day.

There's a new book out by a Smithsonian researcher and bird advocate who has, for a few years now, conducted a war on outdoor cats, and you've probably already heard about it or at least read reviews. I won't spend a dime buying a book that calls a cat a "cuddly killer," but I am angry enough to say something when a book calls on killing all outdoor cats "by any means necessary" because they hunt birds.

In our home, we love all animals. Desi and I often will ignore mice when they share our home, or -- if the problem gets acute -- we set out humane traps so we can trap the mice and set them free outdoors. Desi has rescued many mice from Billy and, before him, from Pubm, our calico hunter who loved to play with mice and eventually kill them. He also lovingly feeds the many birds that visit our backyard each day because who doesn't love birds?

We have never allowed our cats outside for their own safety -- cats do get run over by cars in urban areas -- and because it is true that they will kill birds. That would be fine if they depended on nature for their meals, but the fact is that house cats don't. Even so, instinct in animals is not easy to suppress: when a cat sees a mouse or a bird, that primal urge to stalk and kill kicks in. They can't avoid it any more than you and I can avoid reaching for that free donut at the morning meeting.

Billy was clearly an indoor-outdoor cat before we adopted him. He has a yearning for the outdoors and would escape when he got the chance, although he always came back. Now that we've gotten smarter about his ways, we are more successful at keeping him indoors. I can see it doesn't make him happy, but we have lots of windows with trees outside where he can sit and observe birds without sinking his teeth into them. Desi has also been thinking of building him a catio.

But for stray and feral cats, the solution is not so simple. These animals, no different from house cats, are either cats that once had people and ended up on the streets for some reason or the other, or they are cats who were born in the wild and are unsocialized. They live outdoors, and the outdoors comes with birds who, beautiful as they are, are natural prey for cats.

I agree that when a cat has a home, it is best to keep him or her indoors to avoid unnecessary harm to other wildlife. But calling for killing all outdoor cats because they hunt birds is a ridiculous and downright dumb argument. The Humane Society of the United States has a comprehensive statement on outdoor cats and reducing their populations humanely, through trap-neuter-return or TNR (we got Georgia spayed and Cannoli neutered early on, keeping the feral cat population in our neighborhood under control). It's a great way to bring about a balance without choosing one species of animal over the other.

Now back to those vegan sourdough waffles, I started another batch of sourdough a few weeks back after my old starter had been thoroughly neglected and then cleared out of the refrigerator to make room for other things. This time I made the starter the really old-fashioned way, with nothing but flour and water, following this recipe on the King Arthur Flour website. Everything went very well and I had a bubbling, happy sourdough starter within a week. The first thing I decided to make with it were these vegan Sourdough Waffles -- with whole wheat flour. They were so good, I've been making them every weekend since -- even more often, I think, than my delicious Whole Wheat Vegan Waffles

There's an alchemy that takes place when you add sourdough to baked goods. They become lighter, airier, and flavorful without becoming tangy, as you would expect (unless you add a ton of the sourdough, which you don't in these waffles). We also discussed the importance of probiotics and prebiotics in food and their effect on your overall health in a recent post: sourdough has a ton of those probiotic bacteria because it's fermented, while whole wheat provides the perfect prebiotic fiber for those bacteria to thrive on.

I loosely followed a recipe I found on the King Arthur website. It had eggs, buttermilk and butter, but I used my usual substitutes for a waffle that was spectacular.

In the beginning, when I made these waffles, I added a couple of tablespoons of oil to them, but I stopped after a while and they turn out just as delicious without the oil, so I've made it optional in the ingredients. 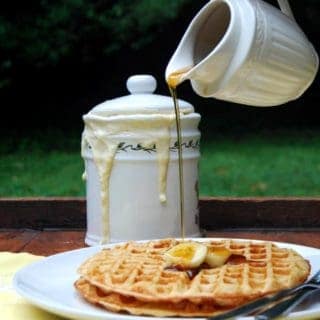