These tasty Vegan Sourdough Pumpkin Spice Waffles are infused with the seasonal flavor of pumpkin and the warmth of pumpkin pie spices like cinnamon, cloves and nutmeg. A wholegrain, soy-free and nut-free recipe, can be made with sourdough discard.

My vegan sourdough waffles are a favorite weekend breakfast both in my home and so many of yours. Today, I have for you a seasonal variation made with delicious pumpkin and pumpkin pie spices. It's a breakfast that'll suffuse you with warmth and comfort--and good health.

These vegan Sourdough Pumpkin Spice Waffles are a huge hit with Jay and Desi so I can promise you that anyone--kid or adult--will love them. Especially with a drizzle of maple syrup and whipped cream or--for some decadence--a dollop of vanilla ice cream.

What we love about these waffles

Yes, absolutely. Follow my recipe for vegan gluten-free sourdough waffles and stir in the pumpkin puree and spices in the morning you bake. 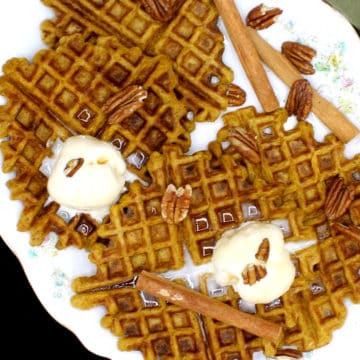 Love these vegan sourdough pumpkin spice waffles? Check out all of my sourdough recipes on Holy Cow!