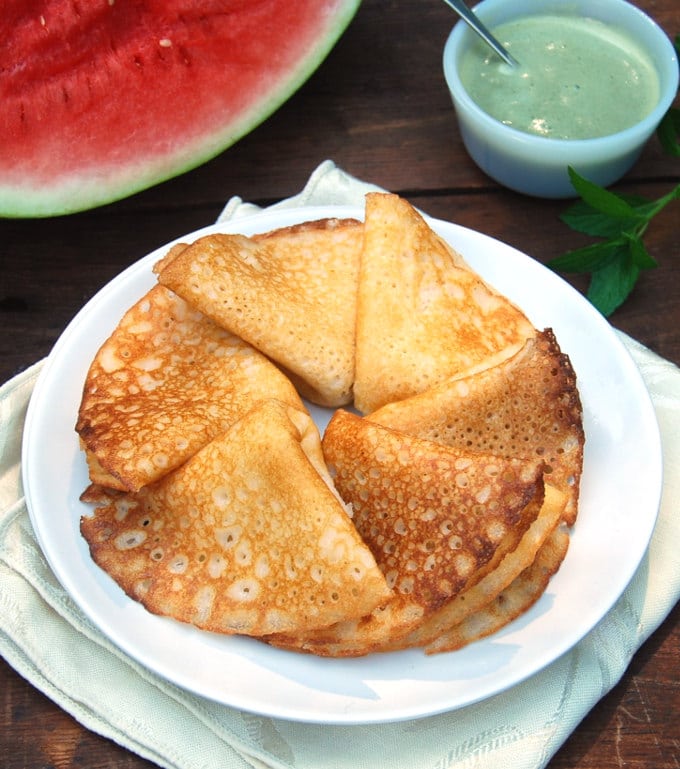 My Maharashtrian mother, and later my Goan stepmother, struggled to fit into the food traditions of my dad's Karwari family, unlike the wives of my dad's two brothers who were also Karwari. You might wonder, on the face of it, why this should be such a big deal? Goa, Karnataka (where Karwar is located), and Maharashtra, are all neighboring states, with some overlapping food traditions. But if you're an Indian, you know that when it comes to food, every community within every region of every state has its own special way of cooking up the same ingredients. So while my Maharashtrian mom cooked varan, a simple dal made with just three ingredients that's a delicacy when eaten with rice, my Karwari aunts (my dad's sisters) said they would rather have dalitoy, their version of an everyday dal, also delicious, made with a few more ingredients, like mustard seeds and dry red peppers. When my Goan stepmother cooked her mackerel into an amshe-tikhshe, a sweet and sour dish, my Karwari aunts looked down their noses and insisted mackerel tasted so much better in a curry made their way.

When they gathered together to cook for festivals, you could be sure that my mom, and after her my stepmom, would be the ones not actually cooking but rather playing the role of the cook's assistant, doing only those things they were "allowed" to do, so they didn't screw up those perfect Karwari meals. 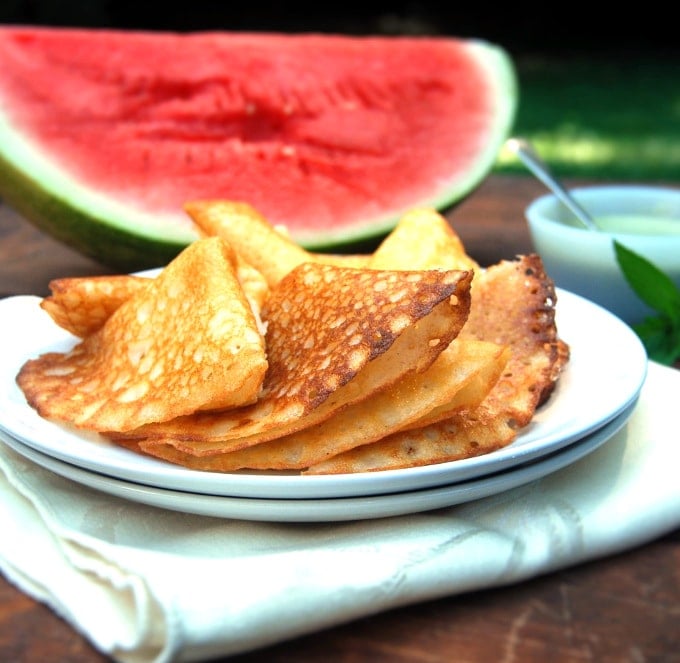 I have no doubt that the rancor between my aunts and my stepmother, which persists to this day, has less to do with their other differences, of which there were many, and more to do with the fact that my stepmother was forced, despite being a great cook herself, to play second fiddle to my aunts on matters of food.

One recipe that my stepmom did adopt willingly from my Karwari aunts, and even bettered, was Kalingada Polo, or watermelon rind dosa.

Recipes like watermelon rind dosa have an innate appeal for Indians who love to recycle every last bit of everything. I can't speak of India as it is today, but in the land I remember, people recycled practically everything. Plastic bags from department stores would double up as purses and bags for college students and even office-goers. Anything that could be sold to the raddiwala (vendors who buy paper and plastic for recycling) -- like newspapers and plastic bags that were used as packaging for milk -- would be sold. Resealable cans of shortening (sold under the brand name of Dalda when I was a kid) would turn into storage for rice and dal. Tufts of rough coconut fiber would morph into free, organic scrubbers to clean out pots and pans.

In my childhood home, the trash my family of five generated daily would have fit in a cup, and even then it was mostly organic waste, like banana peels and vegetable waste (and that was probably only because no one had devised a recipe with banana peels -- yet).

In homes that had yards, like Desi's, the vegetable waste would turn into compost, but as Bombay apartment dwellers we didn't have that luxury. 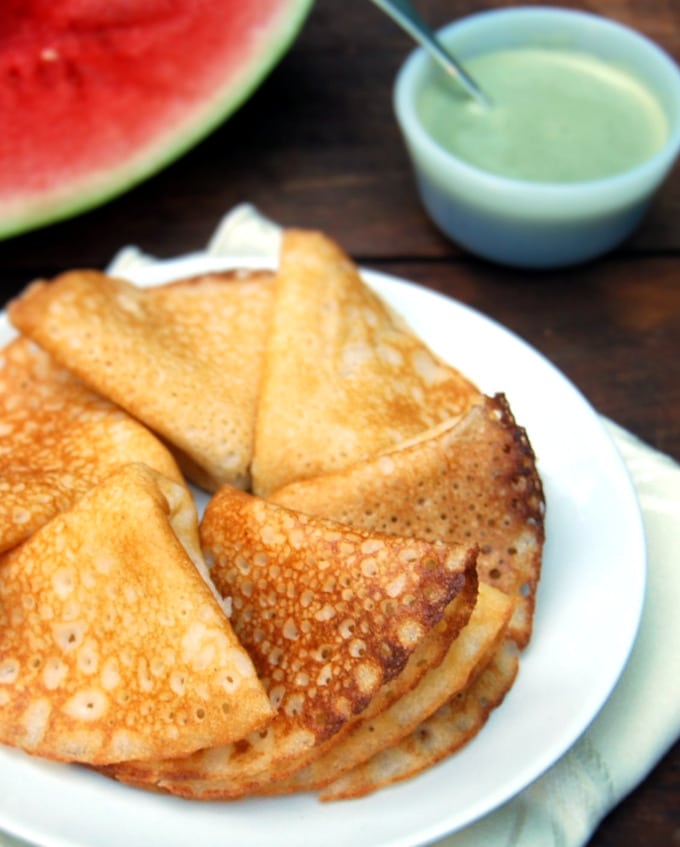 The watermelon rind dosa uses a part of the watermelon that would otherwise be discarded -- the white part that is not as sweet as the pink although not as tough as the green skin. But that white part is rather edible, and even better, it is packed with several vitamins. Why waste it?

This is a natural recipe for summer, because who doesn't love biting into this incredibly juicy fruit in these sweltering temperatures? All you need to do is save the white portion and then blend it up with some rice and a couple of other ingredients. The dosa itself has the refreshing, unmistakable flavor of watermelon and is quite addictive.

In our home, you will always find watermelon in the refrigerator in summers, because Jay loves nothing more than a watermelon milkshake with a dollop of ice cream. I've been making this dosa recipe more times than I care to count, and there have been no complaints.

Serve up the dosa with mint chutney or sambar for a delicious meal or a snack. You can even add some jaggery to make a sweet version. 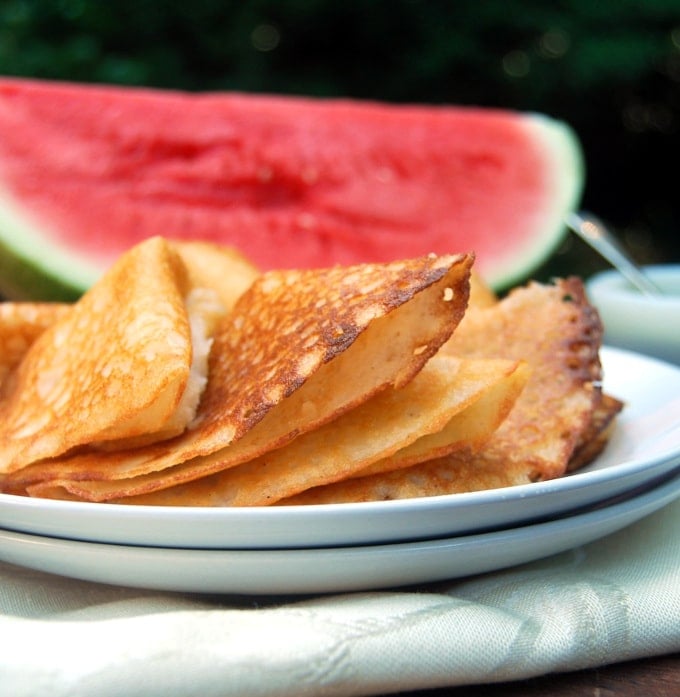 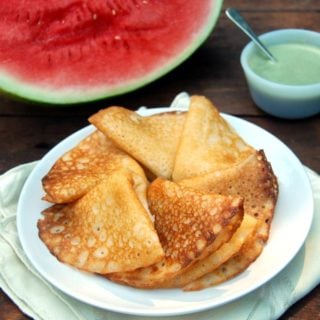 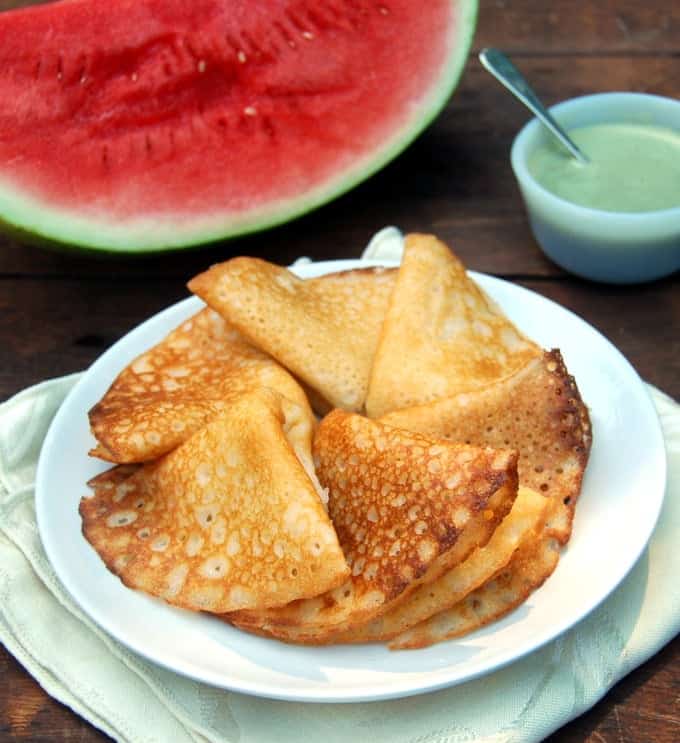