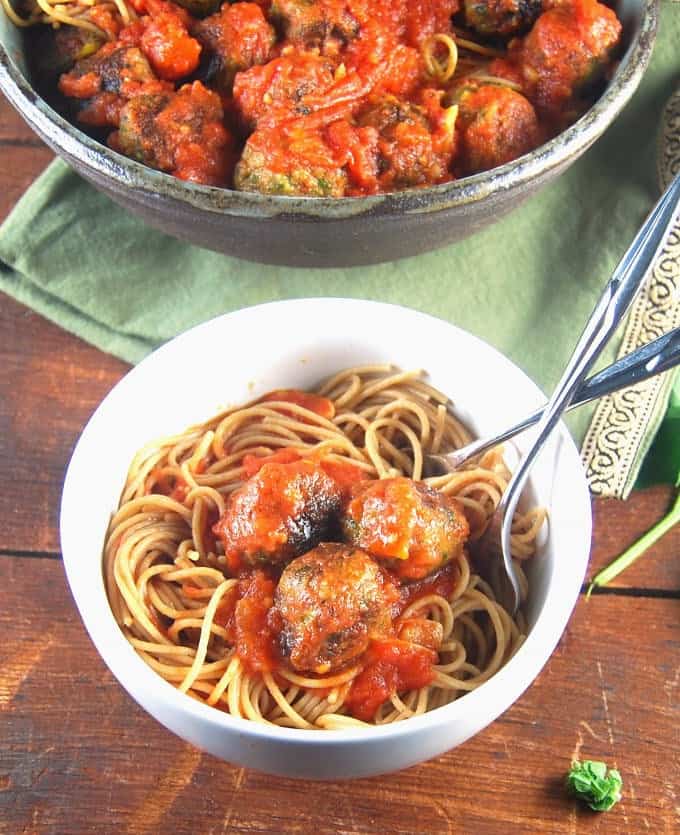 I was at IKEA the other day for some odds and ends and on the way out I picked up one more thing I'd wanted to get my hands on (and into my tummy) for a while now: a bag of vegan meatballs.

I was as excited as the next vegan when IKEA famously introduced these last year amidst tons of media coverage. But I was also a little underwhelmed when I read their ingredient list: sweet potatoes and chickpeas, I remembered thinking, did not sound like meatball material. But I don't judge without trying, and I couldn't wait to try. 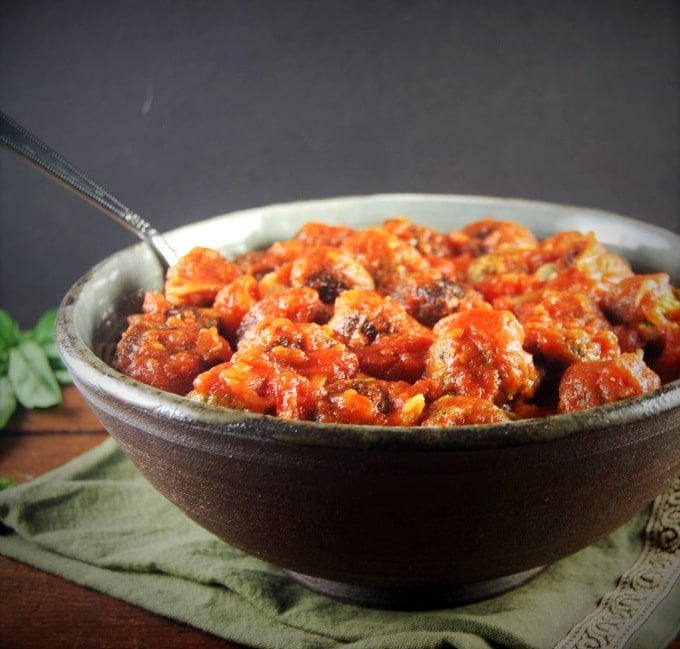 The IKEA meatballs certainly lack the texture of a regular IKEA (or any) meatball made with meat, and they are a bit sweet which is an unexpected taste in a meatball, but they are rather tasty. Desi claimed they tasted like bondas, spiced lentil dumplings from South India. That sweetness, though, was good with the tangy marinara and even Desi could not stop digging in. I also like that the ingredient list does not include any preservatives or other alien-sounding stuff and the meatballs have a good dose of protein. For those with Celiac considerations, the meatballs are also gluten-free.

This Spaghetti and Meatballs recipe I have for you today is an easy one, and rather lazy because it includes these very IKEA meatballs and my favorite marinara recipe ripped off Julia Moskin. This is a delicious dish, and I've found that it does very well with my eight-year-old (yes, Jay had a birthday in June) whose love for marinara is matched by his love for meat substitutes. I talk to Jay often about the lives of animals in the food industry, and he is sensitive and aware of the cruelty inherent in most meat production, but he also watches his friends at school scarf down pepperoni pizza, chicken nuggets and hot dogs day in and day out, and I can see that part of him wonders why he cannot have all that. Meat substitutes, I find, are a good compromise and thank goodness you can find -- or make -- a substitute for almost anything these days. 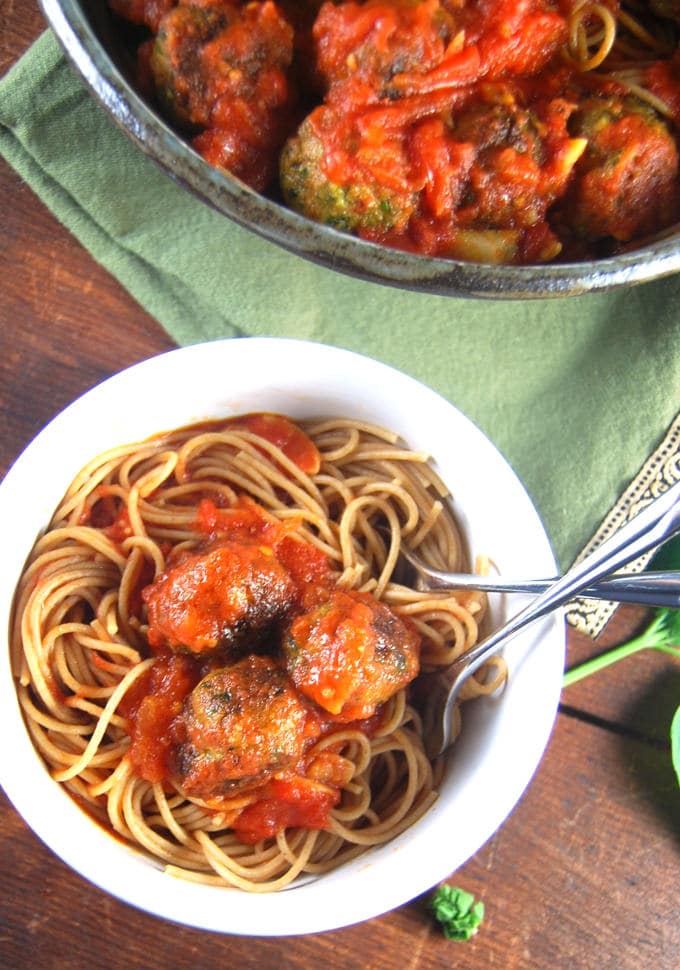 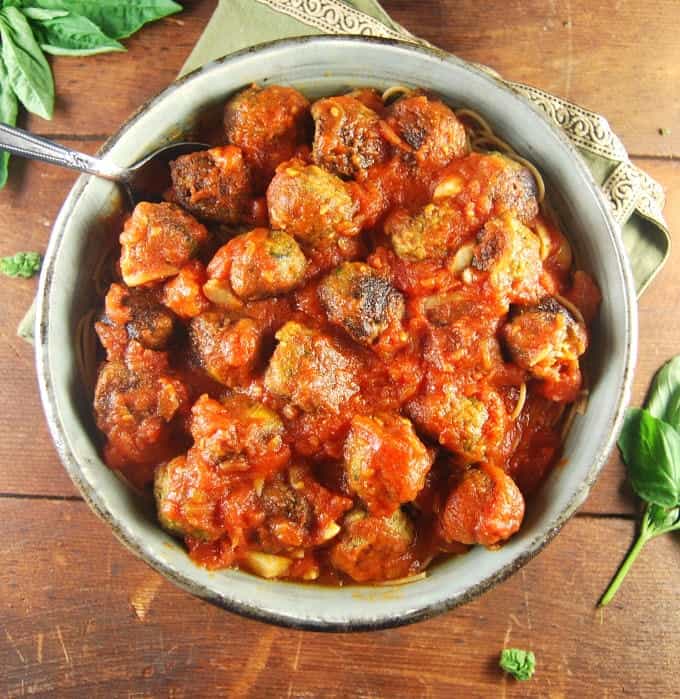 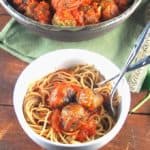 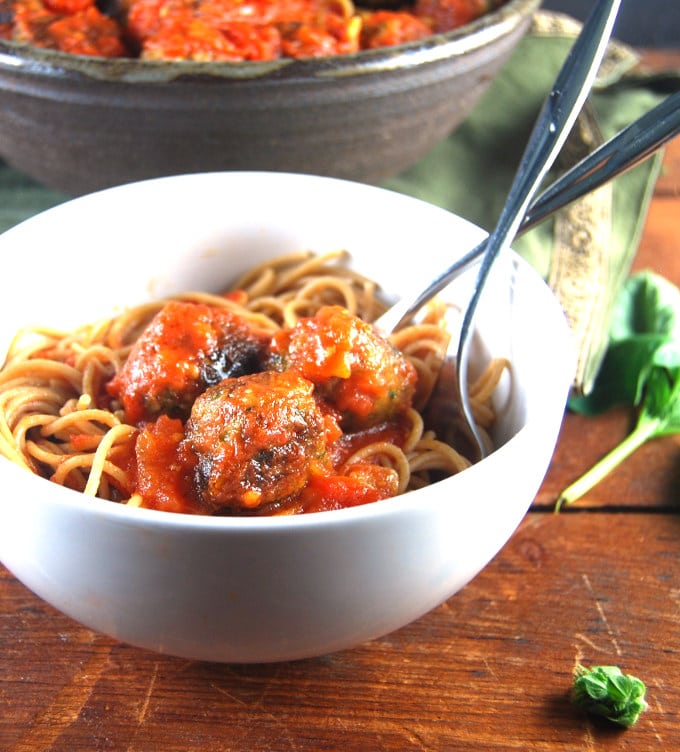 I am rather late with the giveaway winner announcement because life's been keeping me busy. Last week I made some time for fun: Desi and I had a chance to watch one of our favorite Indian singers, Asha Bhosle, in concert at Wolf Trap's outdoor amphitheater in Northern Virginia. Bhosle, now 82, is one of the last living singers of Hindi cinema's golden age of music, which included such legends, besides Bhosle, as Mohammad Rafi, Lata Mangeshkar, Mukesh, and Kishore Kumar, and ran from the 1950s to the 1970s. All but Mangeshkar, who no longer performs because of her advanced age, are now dead. Because both Desi and I are huge fans of Bollywood oldies, we were incredibly excited. We also don't get out to many desi events here -- I've probably been to three in the 20 years I've lived here -- and it was utterly joyful to experience nostalgia with hundreds of other non-resident Indians.

Moving on to the giveaway winner, chosen at random - it's Leslie Grabowski. Congratulations, Leslie, and write to me at [email protected] with your address. You should get your pressure cooker directly from Kuhn Rikon. I hope you love it as much as I love mine. 🙂