A crusty, airy, whole wheat sourdough ciabatta bread that tastes as delicious as it looks and is quite easy to make.

Latest in my adventures in baking with my sourdough starter is this crusty, healthy Whole-Wheat Ciabatta. It is, quite simply, as good as bread can get.

Ciabatta, as you know, is my favorite Italian bread. Its crackling crust, soft texture with those large, airy holes, and delicious, slow-developed flavor are to die for. But so far I've only made ciabatta with white all-purpose flour because that's what everyone does, don't they? And as much as I had dreamed of making a healthier, wholegrain version, it was hard to imagine that whole wheat, with its low-gluten burden, would make a good ciabatta -- or even a passable one.

But baking with sourdough has opened up a world of possibilities in my kitchen. Sourdough is just a longer-developed biga -- the starter that begins every ciabatta loaf. But because sourdough has been sitting around for so long and has all of those alcoholic gases in it, it helps give breads a better rise. This feature is especially helpful in baking whole-wheat breads which can use all the rising help they can get to avoid turning into dense bricks (every health nut's baked one of those, haven't we?).

Sourdough is perfect for health nuts because did you know that it actually lowers the glycemic index of breads? That's right. So sourdough breads are perfect not just for the food lovers among us, but also for diabetics or for those watching their blood sugar or even for those watching their weight. That's just about everyone in the world, I'd guess.

If you are among those folks who balk at using sourdough because you are worried about a very tangy bread, rest easy. Sourdough made at home doesn't seem to produce that overtly tangy flavor, and because neither Desi nor I really like a sour flavor in our breads anyway, you can take my word for it. Also, you can control the amount of sourdough you add to your bread. I add just a cup or two at most to most two-loaf recipes which never results in a strong flavor. All that the sourdough does is add a wonderful complexity that you'll love.

The method for making this ciabatta is very similar to the ciabatta recipe I've posted earlier, except that this one's wholegrain and I give it a longer rise. 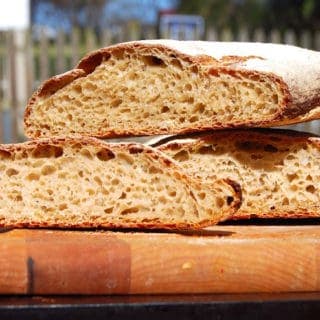