A soft, pillowy, cloud-like focaccia bread you'll fall in love with. Perfect for sandwiches or just for snacking on by itself.

I was planning an Italian dinner for my friend Margo and her family recently and I wanted to bake a bread that would appeal to her son Danny who's as picky as any four-year-old can be.

I pondered myRustic Tuscan Bread and my Whole Wheat Sourdough Ciabatta, but I wasn't quite sure that these fantastic but rather adult breads would hold the required kid appeal. Until I hit upon the idea of this cloud-like vegan focaccia.

The vegan focaccia recipes I've made in the past (including this one from Tal Ronnen) have been pretty good, but not captivating. As I pondered how to make a better focaccia, fate intervened: when I walked into the kitchen and turned on the TV (yes, I plead guilty to watching too much TV), an episode for America's Test Kitchen was just coming on. And they were making focaccia.

So I watched the chef's rather unusual technique which involved creating a rather wet batter not unlike that used for a ciabatta bread, and doing away with most of the kneading. The resulting bread was soft and chewy but also really airy rather than dense as focaccia usually is.

I loved the idea and adapted the technique to my own vegan focaccia recipe (which includes sourdough instead of a biga), not least because it sounded really easy. And who doesn't like easy?

I made a rather wet batter, added the salt after 15 minutes, folded it over instead of kneading it, and then baked it up in two round cake pans. The bread popped up rather high in the oven, making me wonder if it had formed an undesirable skin on top.

It didn't. Instead, the bread was soft and cloud-like, with a soft but slightly crisp golden crust. It was, hands-down, the best focaccia I've ever made or eaten.

I wasn't the only one tickled about it. As Danny ate piece after piece, he declared: "This is really good bread."

Good enough for me. 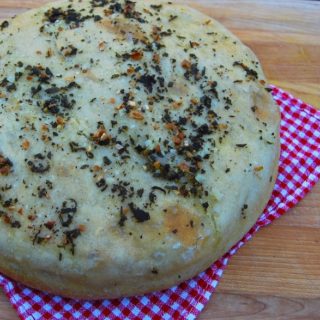