A simple recipe for rice with eggplant and peanuts, adapted from an Ismail Merchant cookbook. This is a delicious weeknight recipe.

Before I learned how to boil water, I read an article in a Bombay newspaper about the great filmmaker Ismail Merchant and his passion for cooking. The reporter had spent a day with Merchant as he prepped dinner in a Bombay kitchen for friends and his film crew. I don't remember the details of what he was cooking any more, but I remember that reading about all those sumptuous foods made me long to be there, in that kitchen, eating that food.

So when I came across a hardcover, used copy of the 1994 cookbook, Ismail Merchant's Passionate Meals: The New Indian Cuisine for Fearless Cooks and Adventurous Eaters, while browsing through Powell's Books in Portland (said to be the largest used and new bookstore in the world-- the flagship store occupies a whole city block), I just had to buy it. Even if it meant lugging it back home to Washington D.C. in my bursting suitcase.

Merchant, who made visually sumptuous movies like Heat and Dust, The Bostonians, and Howard's End with his partner, James Ivory, grew up in Bombay. His recipes drew (he passed away a few years ago) from his Indian upbringing, but the spices appeared to be mellowed down to adapt to Western tastebuds.

While I am not one to shy away from a full-blown spice experience, Merchant's recipes sound truly delicious and somewhat different than your traditional Indian offerings. Last night, I decided to try out his Eggplant Pulao, a luxurious-sounding rice dish made with just a handful of ingredients and quite different from the traditional Eggplant Rice (Vangi Bhat) I make.

It was a safe choice, in some respects: eggplant is the top veggie in our home, and anything made with it (and rice) is bound to go down fabulously, no questions asked. And I loved the peanut-eggplant combination too, because it's such a classic.

I didn't mean to change the recipe much except to replace the butter with a smidgen of oil, but I did tweak a few other things: I replaced the sugar with jaggery, because this unrefined Indian sugar has a deep taste that is perfect with the eggplant-peanut pairing, and I reduced the ratio of rice to eggplant so I would have more eggplant in each bite.

I served the eggplant rice with my Easy Coconut Curry, one of the first recipes I ever learned to make and one I got from another favorite Indian cookbook author, Vimla Patil. I already have that recipe on the blog.

The meal took less than an hour to put together, and it couldn't have been more perfect. The nutty eggplant was amazing with the sweet-sour tang of the curry. This is a great weeknight recipe for those times you want something special.

Serve this pulao with one of these curries 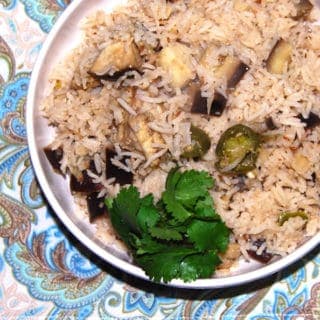