I grew up in Bombay, the capital of Bollywood, India's hyper-productive film industry, but Bollywood never managed to cast its technicolor spell over me.

I always found the melodrama and over-the-top acting hard to stomach. But there was one aspect of the movies that I just couldn't resist: the songs crammed between each Romeo-and-Juliet start and Cinderella ending.

Like the movies, called masala movies for obvious reasons, these songs (about half a dozen in each movie, give or take a couple) catered to every mood. There would usually be a raucous song sung by the hero and his friends before he'd found the love of his life, and perhaps one sung by the heroine with her friends. A couple of romantic numbers when the two had finally discovered-after many fights- that they couldn't live without each other. And a sad one or two after they'd been forced apart by the "villains," usually their parents. All songs were- and still are in today's movies-strictly in playback, meaning the voices you heard belonged to people who were not the ones you saw on screen.

Every night, my dad - a big fan of Raj Kapoor and Dev Anand, both popular actors of his childhood - would fall asleep listening to the radio playing Hindi oldies from the '50s and '60s. They were silken melodies, sung by India's greatest playback singers like Lata Mangeshkar, Mohammad Rafi, Asha Bhonsle and Kishore Kumar. The music would drift in from the next room and although I was supposed to be fast asleep, I couldn't help but lie awake in bed listening to those enchanting voices. I'd want them to never stop, but they did, every night at 11:30, after which the static crackled into the night until my dad woke up to turn the radio off.

Those songs spoke about love, anger, happiness, pain, playfulness and confusion. They left such a lasting influence on me that even today, whether I am high or low, I turn to a familiar song to comfort myself. It may sound corny, but believe me, it never fails.

Still, when Sunshinemom Harini announced her super-fun Jukebox Cooking Challenge event calling on bloggers/cooks to dish out food inspired by a song, I was a little flummoxed because I couldn't think of a song that inspired me to cook. Until I started to think about why I cooked, and when.

I cook, as I guess many others who love to cook do, when I'm perfectly happy. I cook when I'm sad to make myself happy. And I cook for those I love.

Given this strong connection between food and feelings, I chose a recipe based on a theme that is close to my heart, and ties in perfectly with songs AND food, at least for me. The sea.

Because many Indian movies were shot in Bombay, an island on the Arabian Sea, lots of Indian movie songs happen around the sea. From a pensive Dev Anand singing Jayen to Jayen Kahan, lost and a little turbulent like the vast ocean that unrolls before him, to Ek Pyaar Ka Nagma Hai sung by a frolicking family, to a deep-in-love couple weaving dreams about their future with Do Deewane Sheher Mein, the sea provided a perfect and spectacular backdrop.

When I was growing up, an outing to the sea, which was about a mile from where I lived, was a weekend must. We'd go as a group, with family, friends or both, but no matter how often we went, or with who, one thing was a constant: you absolutely had to have something to eat. That, most often, was roasted, salted peanuts, bought from one of the many vendors who walked around with baskets slung around their necks, or Bhel.

The Bhel would be put together right before your eyes, with a splash of this ingredient and that, and then all of it mixed together with a deft hand and served up in a newspaper cone. The end result was magical and the flavors danced on your tastebuds long after you'd licked every last bit off your fingers.

For the event, to go with my bhel, I chose one of my all-time favorite Hindi songs. I love it in good part because of the absolutely ethereal voice of Lata Mangeshkar which weaves perfectly the image of a rainy, romantic afternoon by the sea (a perfect time for some Bhel! Beware the raw-onion breath, though :)).

I've embedded the video of the song because I really wanted to share with all of you its wonderful images of a rain-drenched Bombay in the '70s when it was, presumably, still a glorious, beautiful city where one could walk for a few minutes on a street without getting smacked in the face by a ton of smog and pollution. The video, shot in South Bombay, includes such landmarks as Flora Fountain (a very brief glimpse) and the Rajabai Tower of Bombay University, all British-era (and now Heritage) architecture.

When Moushumi Chatterjee, the actress in the song, walks along Marine Drive, teetering on the edge of the promenade wall, I am reminded of days gone but never forgotten. For those unfamiliar with Indian movies, the gawky guy in the video is Amitabh Bachchan, Bollywood's best-known star (not the greatest actor, in my opinion, although I'm sure there are many Indians who'll disagree.)

I hate to translate this because even beautiful songs fall flat in another language, so I'll give you the gist: she's singing of the fire that the pouring rain evokes in her heart. Sounds mundane, I know, but in Lata's voice, it just isn't.

Here's to my home, Bombay, the pull of the sea, and those wonderful, wonderful oldies! And thanks, Harini, for hosting this lovely event. 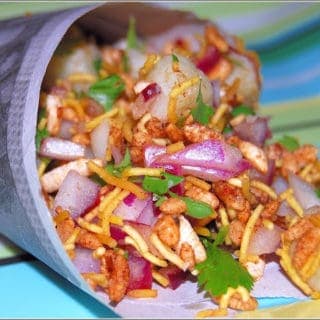