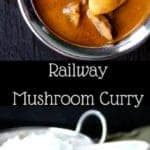 A spicy Mushroom Curry whose flavors date back to India's colonia era. This railway curry, so named because it was served in train pantry cars, was usually made with mutton, but my version is divinely vegan and just as delicious. It's also soy-free, nut-free and gluten-free

If you've been lucky enough to journey on a train in India, here's a treat you'll not just want to try, but one that you will crave for, deep inside your belly.

My Railway Mushroom Curry is a vegan spinoff of a meat-based dish that, the story goes, originated in the pantry cars of the Indian railways during the time the British occupied India.

This is not the railway food I've told you about in my Vegetable Puffs post, where vendors hop on and off railway cars as you journey through the country, offering you gorgeous, salt-of-the-earth foods from peanut brittle to dosas to biryani to tea served in earthen pots.

No, this mushroom curry is rather highfalutin.

The British brought the railways to India, and with it, they brought all of the trimmings, including those elegant pantry cars with shiny wood paneling, tables for four, gleaming crystal and dainty silverware.

There is a lot of lore online about how the railway curry came to be, from chefs tamping down a hot mutton or goat curry they cooked for themselves to suit British tastes, to how the recipe changed with the route of the train. So if you were traveling in south India, you'd have a south Indian-flavored railway curry, if you were in north India, the ingredients would change accordingly, and so on.

Whatever the origin of this, what I love about this recipe, which I posted on this blog in its early days (I've updated it with new text and photos), is its simplicity and, of course, its deliciousness.

When I first made this curry, I adapted it heavily from a "Railway mutton curry" recipe I found on Sanjeev Kapoor's Web site. For those not familiar with Indian television chefs, Kapoor is India's first-- and perhaps one of its most successful-- ones (although full disclosure, I no longer know the first thing about Indian chefs and their levels of popularity).

I've heard Kapoor described as India's Rachel Ray for having spawned a food empire, but I don't think that does him any justice-- I think of him more as India's Julia Child, if you know what I mean. A trained chef,  Kapoor comes up with some pretty great recipes. In fact, I can't think of a single recipe of his that I've tried and not liked.

The mushrooms, I think, do a great job subbing for the mutton (wouldn't you rather just cuddle the lamb?). It's a fabulous curry we make over and over at our home, and I hope it will become one of your favorites too. Serve it up and you would be the toast of the dinner table -- especially if it's accompanied by this 20-minute turmeric pilaf with pistachios and vegan cucumber raita.

How to make the best Mushroom Curry: 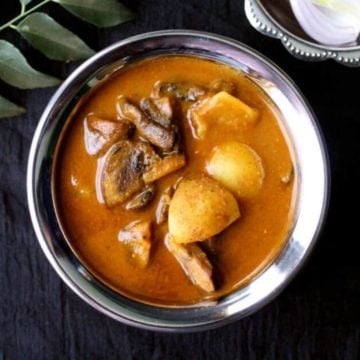