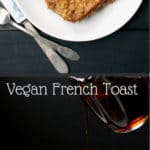 This Vegan French Toast, coated with flax eggs and crunchy walnuts and doused in maple syrup, will have you looking forward to breakfast! Use wholegrain bread for a healthier and just as delicious recipe.

I have made this vegan French Toast recipe for many, many years now and it has lived on this blog for at least eight of those. I know a number of you love it too, and have written to tell me so.

But when I made it once again this week and had Desi photograph it for you, I was wondering -- as I usually do with old recipes that I update -- if there's anything I could tweak to make it better.

Like any classic, this recipe really needs no gilding. When I first made it, I used the most straightforward vegan substitutes: flax eggs for the eggs and soymilk for the cream/milk. I've made other versions of French toast since, savory, stuffed and sweet, but nothing really can beat the simple goodness of this eight-ingredient version.

What I also love about this recipe is that it's really good for you. The bread is whole wheat, and there's flaxmeal and whole wheat flour in the recipe. Yes, you can douse it in maple syrup, as I admit we often do at our home, but you could also just serve it with some fresh fruit or vegan whipped cream if you want to keep it as healthy as can be.

How to make vegan French toast

This, needless to say, is a kid-friendly recipe, so if you have little ones in your home, you can be sure they'll love it. My son, Jay, gobbles this up and it's one of his most requested breakfasts. I hope you'll try it and if you do, come back and let me know all about it. Or take a photo and tag me on Instagram @HolyCowVegan. 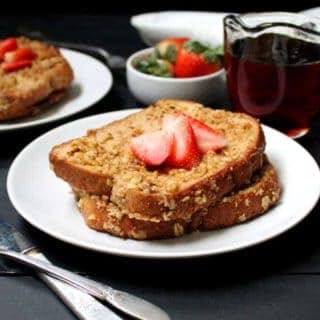