A vegan French Toast Casserole with the deliciousness of bananas and coconut sugar and the healthfulness of flax meal and walnuts. You do not have to make this recipe the night before (although you could if you wanted to). It takes under an hour to get this scrumptious breakfast ready from scratch. Soy-free and can be gluten-free.

This vegan French Toast Casserole recipe is the perfect breakfast or brunch for a lazy Sunday morning when you have a crowd -- or just a very hungry family -- to feed. And it's so good, it'll likely disappear in minutes.

I love French Toast, but I have to admit that I love this French Toast Casserole even more. Partly because it's just so much easier for me to make, with much less hands-on time than if I had to make individual French toasts. (In fact, you need just enough time -- prob 15 minutes, tops -- to slice the bread and blend up the custard and you're done. ) And partly because it's even more delicious than regular French toast. Honestly. In the oven, the bread becomes crunchy on top and it's all gooey and melt-in-the-mouth underneath from the yummy banana custard.

The walnut topping adds more over-the-top deliciousness -- the nuts become kinda candied from the sugar and they're crunchy and out of this world.

This a certified kid-friendly recipe, and I can assure you that Jay was shoveling it into his mouth with his fingers faster than I could say "fork and knife!"

Try this French toast bake and if you do, be sure to let me know in the comments below. Or tag me @holycowvegan and post a photo on Instagram. I'd love to see!

What kind of bread works best for French toast?

I like using French bread because, hey, it's French toast, although any crusty bread works well here. Italian bread is fabulous too.

Because you want enough of the crumb to soak up all of that vanilla banana custard goodness, I prefer a fatter French loaf, like a batard, rather than a slim baguette (if you're feeling like making your own bread, try my whole wheat French bread in this recipe).

You can also use a vegan brioche, which has a different texture, of course, but would be even more decadent and delicious, if that's even possible.

How do you make a French toast casserole without eggs?

Although eggs sound like an impossible-to-do-away-with ingredient in French toast, they really aren't, which you already know if you've tried my vegan French Toast which is yummy without the eggs. But to do away with the eggs and keep something resembling a binder in the recipe, I use heart-healthy flaxmeal and a dash of aquafaba. The aquafaba is optional if you don't have it, use another tablespoon of flax instead. The banana in the custard also serves as a binder while adding more amazing flavor to the casserole.

Do I need to make the casserole overnight?

Many French toast casserole recipes will ask you to prep the casserole overnight, refrigerate it, and then bake in the morning. I suppose they do this to ensure that the bread absorbs the custard thoroughly, but frankly, I've found it to be an unnecessary step in all but the rarest cases. Bread soaks up liquids really fast and even 15 minutes is more than enough for it to drink up all that creamy, vanilla-scented goodness.

Does this casserole make enough to feed a crowd?

Depends on how hungry your crowd is. 🙂 I'd say you can feed a family of six or eight (although I'll admit it's so good, the three of us have attacked and polished off nearly the entire casserole in a single setting).

You slice the bread into 16 slices, approximately, but these are not huge sandwich bread slices but smaller French bread slices. If you're making this for the holidays or for a special occasion with guests, you can easily double up the recipe.

What's the texture of this French toast casserole?

One of the things I love most about this casserole is the perfect texture: the crunchy tops of the baked toast, the candied, praline-like walnut topping and the creamy, smooth, melt-in-the-mouth bread crumb soaked in the custard are almost impossible to do justice to with words. You have to eat them to experience it.

Should I serve this with syrup?

A few drops of maple syrup drizzled over the top of the bread will make this vegan French toast casserole sublime, but there is enough sugar in the recipe that you can leave the maple syrup out, especially if you don't have a very sweet tooth.

Here's the recipe, and if you make it, be sure to let me know in the comments below, or take a photo and tag me @holycowvegan on Instagram. I wanna see! 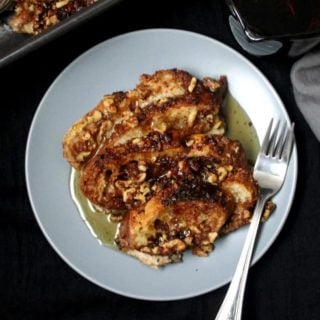 A vegan French Toast Casserole with the deliciousness of bananas and coconut sugar and the healthfulness of flaxmeal and walnuts. You do not have to make this recipe the night before (although you could if you wanted to). It takes under an hour to get this scrumptious breakfast ready from scratch. Soy-free and can be gluten-free.
5 from 11 votes
Print Recipe Pin Recipe Review Recipe
Course: Breakfast/Brunch
Cuisine: Can be Gluten-Free, French fusion, Soy-free
Diet: Vegan, Vegetarian
Prep Time: 15 mins
Cook Time: 40 mins
Resting time (before baking): 15 mins
Servings: 8 servings
Calories: 378kcal
Author: Vaishali · Holy Cow Vegan

For the crunchy walnut topping: