The other day, as I puttered around the web, I ran into an old friend -- the Amul girl.

If you’ve ever lived in India, you don’t need an introduction to the Amul girl. You know the bright orange face that’s at once shy and pert. The blue pigtail gushing out of a huge, perfectly round head. The red-and-white polka-dotted dress with matching red shoes.

But for those of you who have never met her, the Amul girl is an Indian advertising icon who’s stuck around for nearly half a century, peddling rectangular packets of squishy yellow butter to the catchphrase “Utterly butterly delicious.” She doesn’t really have a name, and is known to generations of Indians simply as the “Amul moppet,” the bright little girl who always has something to say-- and it’s not usually about butter.

Although I am utterly vegan, I rather like the Amul girl. She is smart, versatile, even controversial. She is an unapologetic feminist in a country where many women are still denied their rights. She stood up for gay rights  after the country's highest court struck them down. She often pipes in with public service messages and she makes politics far more fun than TV anchors can. Her language of choice is English, but she can speak many more -- important in a country whose people speak dozens of languages and hundreds more dialects. She deftly slips in and out of whatever religion suits her butter-peddling personality at any given time of the year. And she looks great in a sari -- or in a miniskirt.

It is a true tribute to her creators that most Indians see the Amul girl not so much as an advertising phenomenon, which she is, but more as that opinionated friend with a sly sense of humor. I once read Bharat Dabholkar, the brilliant ad man responsible for putting most of those words into the Amul girl’s mouth, say that she ranked in popularity only behind R.K. Laxman’s Common Man, a cartoon who appeared every day in a leading newspaper. But I beg to differ. The Common Man never had the style, the sass or the wit to compete with the Amul girl.

There is also an interesting story behind the organization that manufactures and markets Amul. It started out as a cooperative of dairy farmers seeking self-sufficiency in rural Gujarat, the home state of Gandhi, and their striking story of revolution was so inspiring that it was even made into a movie. But over the years, the Gujarat Cooperative Milk Marketing Federation expanded to become the country's largest food manufacturer, and it has left its illustrious past far behind. Today, it is a humongous organization that has been accused of horrible cruelty to cows. In fact, Verghese Kurien, the former chief of Amul and one of the creators of the Amul girl, went on record to say the corporation slaughters as many as 80,000 calves each year. This was a while ago, so one can only assume that number has risen further.

Honestly, how can we worship the cow on the one hand and consume-- as her gift-- dairy products that come from unthinkable cruelty to her?

Sounds like the perfect topic for the politically savvy Amul girl to take up next, although something tells me she won't. 🙂

My recipe today is a popular Indian dessert that, like many Indian desserts, is usually heavily dairy based. But I made this without any milk or ghee, and I can promise you that if you were to eat it, you would never go back to the original.

Semiya Payasam, also called Shevyachi Kheer or Vermicelli Kheer depending on where you are in India, is an easy way to start making vegan Indian sweets, if you've never tried your hand at them. And if you're a seasoned cook who has made everything out there but this, well, what are you waiting for?

My Semiya Payasam requires no special Indian ingredients-- if you have cardamom in your pantry, you are pretty much set. The dish typically is made with vermicelli, a very thin noodle that you can find at any Indian store, but I use -- and prefer-- angel hair pasta. That's because I can buy whole-wheat angel hair pasta which makes the dish a tad healthier than if I were to use the refined-flour vermicelli. Better still, if I get a craving, I don't have to drive the half hour I need to get to the Indian store because I can find angel hair pasta at any supermarket.

To make this kheer or payasam extra delicious, I use a secret ingredient that I often turn to when making dairy-based Indian desserts without the dairy: vanilla extract. This unconventional addition is something I picked up from my mom, who was an incredible cook, and who would add all kinds of extracts and essences, with vanilla being her favorite, to Indian sweets. As I have explored vegan versions of Indian sweets, I have found that the vanilla adds great depth to the non-dairy milk base without screaming "I'm here."

I have been feeling a bit under the weather today, and this has already turned into a super-long post, so I am going to shut up now and get on with the recipe. Try it. Next time you run into the Amul girl, you'll be going: "Who needs butter?" 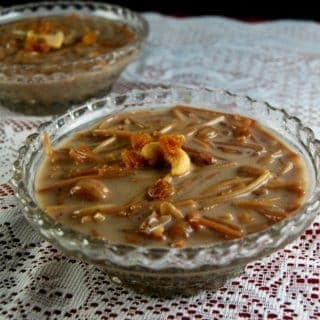