This is a south Indian style Chickpea and Quinoa Salad and my healthy and delicious spin on a popular recipe for Navratri. Kala Chana Quinoa Sundal is packed with protein and veggies and is a complete meal by itself. It's also gluten-free.

Navratri was always my favorite time of year, growing up, because it was the one time I was permitted to stay out late-- even past midnight.

Like most Indian festivals, Navratri -- which literally translates to "nine nights" -- has a religious significance, but like most religious festivals, you didn’t have to be religion-minded to join in. So every evening, for nine days, after the ladies were done lighting lamps before an image of the goddess Kali, to whom this festival is dedicated, the dancing would begin, as late as 10 p.m.

People of all ages, dressed in their best, would descend on the most popular “dandiya” spots in their neighborhoods. These were like open nightclubs with no lines. Everyone was welcome and the crowds would pack in until, it seemed, there was no room to breathe. All you needed to bring was a pair of dandiya -- colorful wood batons that made a clicking sound as you tapped them up against the dandiya of whoever was dancing next to you. The dancers formed a huge circle of dozens-- sometimes hundreds -- of people. In the background, music, usually popular Bollywood music, would blare over huge speakers. All of this gaiety and festivity would be repeated for nine days, lasting well past midnight each night, and the only thing, I think, that kept all of us from being utterly bereft when it ended was the knowledge that Diwali was on the horizon.

With all of the socializing that went on, this was often a place where young people met, fell in love, and those who were already in love were a little bolder about showing up together in public. In a country where young people often grow up, and are married, under the strict supervision of their parents, it was as close as you could come to a date night. Nine in a row!

I was lucky enough to live in one of these dandiya hotspots. The apartment complex where I grew up had a huge, open playground where the municipality was supposed to put up slides and see-saws (teeter-totters) and all those other fun things for the kids of the neighborhood. They never did, which left the wide open space -- a rarity in Bombay -- perfect for other social activities, like community gatherings, even weddings, and -- of course -- dandiya.

The dandiya in my neighborhood was particularly popular. One of its organizers happened to be a fitness trainer for some Bollywood stars, and during Navratri he would use his clout to bring over a few. Even as a kid Bollywood annoyed me, and I would watch with disdain from a corner while women of all ages grabbed and clawed at whatever poor movie star happened to be in their midst.

While the dandiya, a tradition from the west Indian state of Gujarat, is popular in that region and has filtered into cities like Bombay, the denizens of India's southern states, particularly Tamil Nadu, have their own unique tradition for Navratri: golu, or kolu.

A golu is a colorful arrangement of dolls and statuettes of Hindu gods and goddesses arranged on seven steps. Each home has one, and people wander around their neighborhoods, visiting homes and collecting "prasadam," the food offered to the gods. Desi remembers, as a child, making the rounds of several homes to collect sundal, a delicious and simple preparation of garbanzo beans or chickpeas, seasoned with a few spices, that's always made for Navratri.

Navratri is being celebrated in India this week and next, and although I live far from all the fun, I didn't want to miss out on some of the delicious food typical to this festival. Therefore, my Kala Chana and Quinoa Sundal.

While a typical sundal would not contain a grain, I wanted this sundal to do double-duty as a meal and not just a snack. Besides, I was pretty confident that the nutty quinoa would be great with the kala chana and the simple sundal spices. I was so right.

I call this a sundal, but you might just as well call it a salad. I added vegetables, not a typical sundal ingredient, to make this a healthier meal. You can experiment with all sorts of veggies-- I used squash, mushrooms and green peppers. Carrots would be wonderful here, and so would some roasted eggplant (pre-roast it because it won't cook as fast as the other veggies).

It's the weekend, guys, so I am going to leave you alone now, after sharing with you this awesome recipe. Hope you try it -- and enjoy! 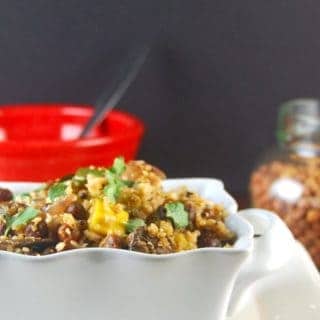