Zunka Bhakar is a rustic food from the belly of Pune, a city that lies southeast of Bombay. A flatbread of millet flour is served alongside a stir-fry of vegetables with chickpea flour. It is spicy, savory, delicious, gluten-free and, of course, vegan.

I once spent a magical year in Pune, a then-sleepy city three hours southeast of Bombay's concrete jungle, and nestled in the emerald-green valley of India's Western ghats.

To a young woman from a fast-stepping city like Bombay, Pune in those years seemed a little like the backwaters, at least in the beginning. The pace of life was so slow, at times you'd think the city had forgotten to wake up well into daylight.

I was a student at Pune University's journalism school. Classes were held at Ranade Institute, a one-story building with a terracotta-tiled roof on Fergusson College Road. The building actually looked more like an old, sprawling house which was a surprise, used as I was to the flat, cement-faced college buildings of Bombay. It was surrounded by trees and quite picturesque with an ageless, almost-rural charm.

Pune has traditionally been known as a center of learning, and the area around Ranade was home to a number of old and new colleges. There were a couple of restaurants down the street, one named Vaishali (you can see why I didn't forget the name) and the other Rupali, I think, both popular hangouts for all the students in the area. Often, when attending classes got too tiresome, about half a dozen of us would escape to one of these restaurants and order two or three cups of tea that we'd share along with plenty of conversation.

Sometimes my friend Suchitra and I -- we were both new to the city-- would take off after classes to explore Pune. Getting anywhere was a tiny adventure on the red-and-yellow public transport buses which was all we could afford as broke students. The dust-smothered buses were unfailingly late, had a tendency to break down in the oddest of places, and heaven forbid you were waiting in line around lunchtime because that was when every bus driver in the city took at least two hours off. All you could do was sweat under the sweltering sun and curse under your breath.

The apartment we had rented was in a new development near the city's outskirts. The only grocery store for at least a mile around was run by a young, bearded man named Kulkarni who lived in a room behind the store with his wife and newborn child.

Kulkarni had a way with disappointing you frequently, but with an innocent smile. You'd be dying for a cup of tea and you'd discover you were out, so you'd run to the store to get it, and of course-- he'd just run out of it too. But, he'd promise with a smile, he'd have some more tomorrow.

Each afternoon, Kulkarni would lock the store and retreat into his home for lunch and a nap. The store would remain closed for at least four hours, and if you needed something, well, tough luck.

In the beginning, I'd get mad. With my Bombay blood all a-bubble, I'd wonder why everyone was so accepting about all this sloppiness. To which one of our new friends, Keskar aunty (every earlier-generation acquaintance and friend is an "aunty" or "uncle" in India), would say with a calm smile and in Marathi, the language spoken in Pune: "My dear girl, that's how we are. Punekars are as patient as cows."

It was impossible to argue with such cool acceptance. They know it, I remember thinking incredulously, and they don't want to do anything about it?

But over time, Pune began to get to me. I began to fall in love with the deliberately leisurely pace, the "things will take care of themselves" attitude. I even learned to laugh about Kulkarni and his grocery store, and to wait at the bus stop without busting a gut.

Pune had charms I had never found in Bombay. Everyone seemed to care about everyone else. Everyone was family. It was a safe enough city, but when I once insisted on walking home alone after dark, my father's friend-- whose family I'd been visiting-- sent his son to follow me, at a distance, so they would be sure I got home all right. When I found myself alone at home one night because my father and brother were traveling, a neighbor, without being asked, insisted that her daughter stay over so I wouldn't be lonely or afraid at night.

Strangers kindly offered you a ride on their two-wheelers (and you didn't feel afraid about accepting). New friends opened up their homes and hearts to you. And the city itself had a crumbling, ageless beauty that was easy to love.

One of those crumbling, beautiful places was Sinhagad, a fortress atop a hill a few miles outside Pune. It was once the site of an historic battle and is now a popular picnic site. Getting to the fortress required, at least at the time, climbing up the stony hillside, making it quite an adventure.

Once you were up there, and had your fill of the beautiful landscape and other-century relics, there was the food. In Pune, the locals would rave, there's no Zunka-Bhakar such as the one found at Sinhagad.

This rustic Maharashtrian dish is typically eaten by farmers, although it's easy enough to find it in fast-food stands in the cities now. And it was indeed true that after the rough climb to Sinhagad, the zunka-bhakar, cooked and sold by women whose families lived in huts around the fort, tasted extra delicious.

I go back to Pune now each time I visit India, because one of Desi's brothers lives there. I always look forward to it, although the city has changed into a pollution-clogged, fast-moving clone of Bombay. Last year we got into a nasty spat with a goon-like guard at the jazzed-up Dagdu Sheth Ganesha temple because he insisted we couldn't take pictures of the temple from the street. Our argument quickly drew a crowd of people who butted in to insist that the guard must be right. At the time I wondered, had Pune's accepting attitude gone too far?

Maybe, but I will always have my memories of a wonderful place where I first found out that not rushing through life at a blind clip can be, by itself, deeply satisfying.

I found myself thinking of Pune last week when I cooked up this zunka bhakar. Zunka is made by stir-frying vegetables like green peppers, spring onions or even cabbage with chickpea or garbanzo bean flour and spices. It is simplicity itself, yet incredibly delicious.

Bhakar is a rustic bread made with jowar (sorghum) or bajra (millet) flour, which are easy enough to find in Indian grocery stores. You'd eat the zunka by scooping it up with a piece of bhakar. Both are typically accompanied by a spicy, fiery powder made primarily of red chillies and raw onions.

All together, they are exactly the stuff great comfort food is made of. 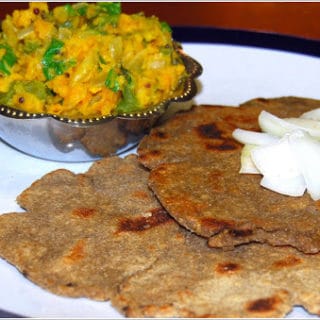