A vegan tandoori naan burger--delicious, tandoori-masala-spiced bean patties are sandwiched in a soft, cloudy naan "bun". It's fun, delicious, nutritious, kid-friendly, and it couldn't be easier.

Yes, you read that right. It's a Vegan Tandoori Naan Burger. And it's damn delicious.

What it is, is two small, puffy, flaky naan breads sandwiching a juicy burger flavored with tandoori spices. Yes, those spices that go into making that shocking orange chicken that's baked up in a rustic clay oven called a tandoor and served at north Indian restaurants around the world. But since this is a chicken-free zone, and happily so, our burger is made with rajma or red kidney beans and some potato to better soak up all of those spicy flavors.

Jay loves veggie burgers with a passion (homemade, not the store-bought ones which are always so bland). And because they are good for him, and easy for me, I try and make versions of burgers as often as I can. He loves naan just as much as he loves burgers (these Naan Calzones are a hot favorite hereabouts), which is perhaps the reason why I always have some naan dough sitting around in my refrigerator these days. Often, for dinner, I will roll out a naan or two for him and bake it up right on the griddle. While naans are traditionally also baked in a tandoor, or in ovens in modern kitchens, griddle-baked naans turn out soft and puffy and are just as delicious.

These vegan tandoori rajma burgers are among the easiest I've ever thrown together and they come together in under 30 minutes if you use canned beans. I like the red kidney beans because they have a great bite, but pinto beans would also be good here.

The potato serves two purposes in this recipe: it helps bind the ingredients, and its blandness also sets off the spices. You can sub with sweet potato, but then you wouldn't enjoy the flavor of the tandoori spices as much because the sweetness would overpower it.

The burger recipe is completely fat-free, so you can munch away -- eat all of them, if you wish. And for the naan bread, I used my naan recipe, with the only difference being that I rolled these out much smaller, just slightly larger than the diameter of the burger patty. Once you've subbed a naan for a burger bun, trust me, you will not want to go back.

And if you absolutely won't make a naan dough, here's a little secret: use storebought pizza dough. It does the job just as well. 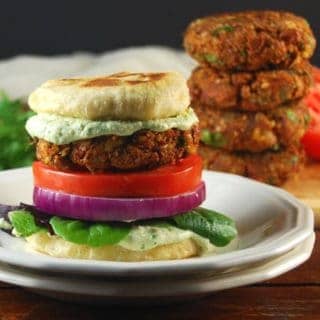