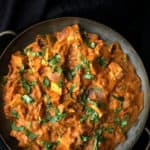 Tofu Tikka Masala is a vegan version of this extremely beloved and appetizing British Indian dish. The tofu is baked and then simmered in a spicy, tangy sauce of tomatoes and onions with ginger-garlic paste, turmeric, cayenne and coconut milk. Serve with brown rice or an Indian flatbread like naan or roti.

This tofu tikka masala is a luxurious, luscious dish that I love making on weeknights when I want a delicious meal in a hurry.

It is super versatile. I can serve it with a very simple rice pilaf, or, if I am feeling like some extra cooking, with a fluffy, soft garlic naan. And it is not a complicated dish, so after a day of running errands or meeting friends, I can get it done in no time at all.

What I also love about this Tofu Tikka Masala is that it is so delicious. The sauce is creamy and tangy and spicy but not hot or overbearing. The tofu, baked until it's chewy outside and soft on the inside, soaks up all of the flavors and becomes a delicious entity on its own. And if I don't feel like making another vegetable side, I don't have to sweat it, because there already are plenty of veggies in this dish.

An interesting fact about tikka masala is that as much as it sounds like -- and is sometimes identified with -- Indian cuisine, it is in fact no more Indian than curry powder or balti cuisine are. Instead, it is a dish created entirely on British soil by residents of Indian origin, who, one can only imagine, were desperate to feed their fire-loving palates with something more vibrant than kedgeree (also a British spin-off of an Indian dish).

Today, tikka masala can be found in restaurants the world over, although it usually includes a meat like chicken and, occasionally, the Indian cheese, paneer. The sauce also includes yogurt. I have eaten them all, in my past life, but I can swear that nothing tastes as good as this very vegan version.

If you're looking for a recipe to make tonight, try this. Or try it even if you aren't. And then put up your feet and feel those Sunday night blues melt away.

For an even quicker way to enjoy this dish, try making my jarred Tikka Masala Curry Paste which is quite the lifesaver on busy nights when you want a great meal on the fly. For luck, try this Black Eyed Peas Tikka Masala. Or, for a quirky take on a traditional favorite, try my Tikka Masala Pot Pie. 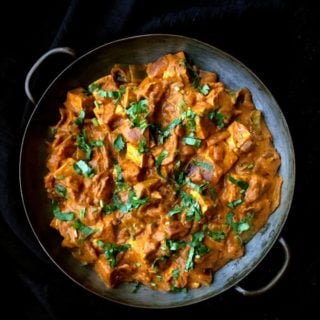