Jump to Recipe Pin Recipe
Bhindi Masala is a popular Indian restaurant dish of tender okra in a deliciously spiced tomato-onion sauce. Serve it with roti or dal and rice for a meal to remember. A vegan, gluten-free, soy-free and nut-free recipe.

Whether you love okra or hate it with a passion -- and everyone falls in one of those two categories -- you will definitely love Bhindi Masala, a dish so flavorful and so delicious that it makes an appearance on nearly every Indian restaurant menu.

Most Indians fall into the first category, the kind that loves okra, which also goes in that country (thanks to the British) by the macabre name of lady's fingers. That's because Indian cooks learned long ago that the first rule of cooking okra is to rid it of that hateful goop that can transform this veggie from delicious to dreadful (although that goop can be a useful thickener in recipes like gumbo and in sambar, a South Indian dal).

The way this is usually done is either by stir-frying the okra in plenty of oil at high heat, sealing in the slime before it has a chance to escape into the rest of the dish, or by frying the okra in oil before adding it to the rest of the recipe. The latter is the technique usually used for Bhindi Masala where you really, really want your bhindi, or okra, to be crisp and firm, not ooey and gooey.

But today, for you, I have a third way, and it's a stroke of genius, even if I say so myself. An air fryer.

I told you about this, my new favorite appliance, in my Air Fryer Tofu recipe post last week. And I've been having a blast discovering new ways to use it to help me in the kitchen.

For this Bhindi Masala recipe, I would have in the past used the oven to cook my okra so I use less oil than frying the okra requires (and you can do that for this recipe if you don't have an air fryer). But an air fryer just made things so much easier.

This recipe comes together really quickly, and surprisingly so for a dish with so much flavor. And you can make it even faster if you have my Tomato Onion Masala Sauce for Indian Curries in your refrigerator (instructions are included separately in the recipe box below).

How to make the best restaurant-quality Bhindi Masala:

What do I serve the bhindi masala with?

Bhindi masala goes beautifully with roti or naan.
Or try it with Jeera Rice and a dal like this Spicy Urad Dal on the side.

Can I make this in one pot?

Your dish can be one-pot if you stir-fry your okra in oil. But if you make it in the air fryer or oven, you will need to use the air fryer basket or a baking sheet.

What ingredients do I need to add to my shopping list?

Okra pods (fresh, not frozen): The frozen pods are slimier, so it's best to use the fresh pods in this recipe, where you want the okra to be crisp and dry, not wet and stringy.
Vegetable oil: Any vegetable oil that has no strong flavors, including avocado oil, peanut oil, safflower oil or sunflower oil.
Cumin seeds: Cumin adds lovely, earthy flavor to this recipe.
Onions: Onions build the flavorful sauce so integral to bhindi masala.
Ginger: For flavor and healthfulness.
Garlic: For even more flavor and healthfulness.
Green chili peppers like serrano or jalapeno (optional): There is some cayenne as well in this recipe, so you can leave out the chili peppers if sensitive to heat. They add a lot of herby freshness, though.
Tomatoes: To help build the sauce, with the onions, and to add tangy-sweet flavor.
Coriander powder: In north Indian dishes, like this one, coriander adds fresh, lemony flavor.
Turmeric: For more healthfulness and color.
Paprika or cayenne: For some color and spice.
Amchoor (dry mango powder): Amchoor or Amchur is another flavoring ingredient commonly found in north Indian recipes, and it adds a lovely tang.
Cilantro: For fresh, herby flavor. 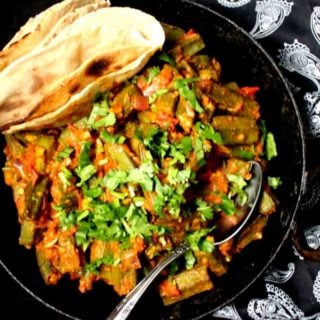 If making it with the basic tomato onion sauce: