A favorite Marathi rice dish I love to make and eat is this easy but complexly flavored Masale Bhath, which translates to rice with masalas or spices. This is a deliciously healthy and vegan, gluten-free, soy-free recipe. You can make this rice recipe without any nuts--although the nuts are a yummy addition. 🙂

As the daughter of a mom born in the Alphonso-gold state of Maharashtra, I've always had a special place in my heart for foods like Kande Pohe, Puran Poli, Varan Bhath and Sabudana Khichdi.

But one of my all-time favorite foods, one that's considered so special it's almost always on any Maharashtrian wedding menu, is this Masale Bhath.

The food of Maharashtra, much like its Marathi people, is complex and lavish with an undertone of sweetness--and a salt-of-the-earth approach that lends itself easily both to home cooking and the state's famous street foods like Pav Bhaji, Misal Pav and Vada Pav. The cooks of this state make rich use of legumes, especially sprouted ones, grains, leafy vegetables, coconut and spices in an assortment of tasty dishes. Then, they tie it all together with a spoonful of sugar.

This Masale Bhath, like a few other dishes, is a common thread that runs through all these cultures and cuisines, with one caveat: it is never really made exactly the same way in any two homes.

And by that I don't just mean a couple of spices are replaced with a couple of other spices, or a technique is tweaked this way or that. No, a Masale Bhath, I've found out over the years, is usually as unique as the cook who makes it.

This Masale Bhath I am sharing with you today is also uniquely mine, and it comes from my memories of eating it at numerous weddings I went to as a child.

My main interest at these day-long events, with mandatory attendance if you happened to be related to the bride or groom, was the food. Whenever possible, I took off with like-minded cousins to explore the kitchen and dining hall on the ground floor, as far as we could get from the day-long rituals and prying questions about school and grades from distant uncles and aunts you never saw outside a wedding hall. The cooks and their helpers were never too happy to see us, but they didn't shoo us away so long as we kept our distance while salivating over all the delicious smells wafting from the pots and pans.

Over time, those big platefuls of masale bhath, deep-fried papads, pakoras (or bhajjis, as we Maharashtrians call them), gulab jamun and batata vadas, eaten at long tables with the bride and groom sitting at the center, were pretty much etched into my brain and my tastebuds for eternity.

If you've never eaten a Masale Bhath before, you're in for a treat. This is an extremely healthy dish, with lots of veggies and rice married together with a spice mix unique to Maharashtra, called Goda Masala, or "sweet masala".

Now that may sound like an oxymoron, but what it really means is that it includes, in addition to spices, some elements that are nutty and sweet, like coconut, sesame seeds, poppy seeds and fennel.

You can buy goda masala online or at any Indian store, but if you can, I'd strongly advise you make your own. That's because I've often found the coconut goes rancid in storebought versions, and the couple of times I actually bought this masala, I had to throw it out without using it. Making goda masala at home is quite easy and you can find my goda masala recipe on my DIY spice mixes page. For those who'd rather buy it, I'll add an affiliate link in the recipe box below. Remember to refrigerate it in an airtight jar.

Some Masale Bhath recipes can be quite complicated, but I've really simplified this dish, while taking away none of its complexity. The goda masala does most of the work for you, along with the veggies.

I hope you'll try it, and if you do, be sure to leave a comment and a rating below to let me know!

How to make a delicious Masale Bhath:

The veggies you'll choose for this recipe will influence the flavor, so keep that in mind. That said, you have some leeway to mix and match and sub keeping your own preferences in mind.

I like using eggplant and tendli or ivy gourd, both veggies that I remember were always used in the versions of Masale Bhath I ate. I didn't have either when I made it this time, so I went with cauliflower, carrots and potatoes, and I threw in a zucchini to replace the ivy gourd. It all worked out quite well.

Masale Bhath is usually made with Kolam rice, which has medium-sized grains that don't clump when cooked. Basmati is a perfectly fine substitute, and it's the rice I use.

For the masale bhath, you don't need to soak the rice, but you do need to wash it, either by putting it in a strainer and running cold water over it for a minute or so, or by placing it in a bowl and washing it in two or three changes of water. This will remove excess starch, reducing the chances of the rice grains sticking to each other when cooked.

Usually, Masale Bhath would be cooked with ghee because it's a special dish. But coconut oil is a fine vegan substitute. Coconut is a food widely eaten in Maharashtra, and there's coconut in this recipe, so it fits in quite well.

You need Goda Masala for this recipe, but at a pinch, you can substitute with Garam Masala. If you do that, make a separate powder that you can add to the recipe along with the garam masala: toast 2 teaspoon sesame seeds, 1 teaspoon poppy seeds, 1 teaspoon cumin and 2 tablespoon coconut on a dry skillet until lightly brown, then blend into a powder and use.

Make sure, after adding water to the sauteed spices, veggies and rice, that the water in the saucepan tastes a little saltier than you'd like your food to be.

Once the water has boiled and you cover the saucepan with a lid to let the rice cook, don't be tempted to peek or give it a stir. Let the rice cook undisturbed for 15 minutes, and then let it stand for 10 more minutes for the best results.

After removing the lid, fluff up the rice grains with a fork, if possible, so they remain separate.

Ingredients you'll need for this recipe:

What do I serve with the Masale Bhath?

Serve with vegan cucumber raita, poppadum and an Indian lime or mango pickle on the side for a fantastic meal. 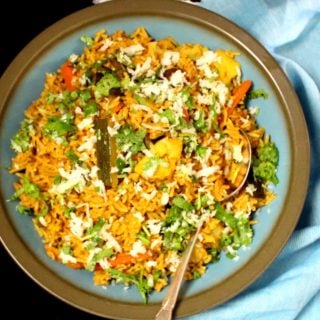