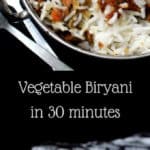 This delicious Indian restaurant style Vegetable Biryani has aromatic grains of rice, a spicy masala curry, chunky vegetables and tofu cubes, It is hearty and tasty and it takes less time to make than it would to order takeout. Better, at 194 calories a serving, you can afford to indulge. A vegan, gluten-free recipe, can be soy-free and nut-free.

Over the years I've shared with you countless recipes for veg biryani (vegetable biryani or vegetarian biryani), that delicious rice dish so beloved by Indians and lovers of Indian food. While making one may seem daunting to anyone who hasn't made a biryani before, I am here today to tell you that it's really not that hard. In fact, you can make this authentic and delicious, one-pot, restaurant-style Vegetable Biryani recipe I am about to share with you in just over 30 minutes.

And it tastes so good, you will wish you had made more.

This is a true and traditional layered vegetable biryani, and once you've made it and eaten it, I know you'll be back to tell me it's the best veg biryani you've ever eaten. Just because it doesn't take half a day to make, or because you get some help from the microwave, does not make it any less authentic. The flavors are exactly the same, you have all the fun, and nobody's the wiser. Now who's the smart one?

I came up with this easy recipe because at our home biryani's a favorite with both Jay and Desi. Jay, in fact, can eat it for breakfast, lunch and dinner and in between. So over the years I've tweaked this procedure and that to ensure that I can get this vegetable biryani ready for the dinner table or for the lunchbox in no time flat.

How to make the best vegetable biryani

Using biryani masala or garam masala for the veg biryani

That's an easy one--you should use biryani masala for the best biryani, although garam masala will do at a pinch.

A biryani masala is much more complex, with different flavors added to it and even some dry fruit. It needs a number of ingredients, so unless you have the time, I recommend buying it at an Indian grocery store or online. You can get the one labeled "chicken biryani masala" or "mutton biryani masala," doesn't really matter, because the masala itself is vegan.

If you really want to make your own, here's my recipe for an amazing biryani masala.

So let's get started on that amazing veg biryani. Is your mouth watering already? I know mine is, and I just ate some!

What do I serve with the biryani? 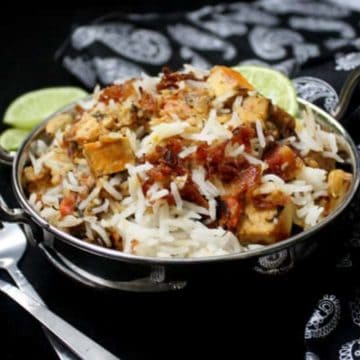