My dog Freddie has a seeing-eye mom.

Yeah, you read that right. Freddie is 16 years old and almost completely blind. but he still has the energy of a puppy. When he hurtles around the house and on his walks, he sometimes bumps into things that get in the way. And he needs someone to guide him along.When Freddie came to us as at the respectably senior age of 12, he was already beginning to lose his sight. Early on, he attached himself to me, unlike most of our other kids who for some reason I just cannot understand gravitate toward Desi as their First Human.

As Freddie's sight deteriorated, he quite naturally adopted me as his seeing-eye dog (calling me that was Desi's idea, of course).

He likes to follow me no matter where I'm going or what I'm doing, or no matter what time of day or night it is. When I work at the computer, he sits down next to me and sleeps for hours (he's there right now). When I get up, he sits up, yawns, then sleepily and staggeringly walks behind me.

If it's the bathroom, he waits until I'm done. If it's the kitchen, he's thrilled because there could be a treat in it for him. If I want to take a nap, guess who's there to nap right beside me?

Still, there are times, especially at night, when he can't quite tell where I am, and he dashes around in confusion.

At first, we tried to figure out a way to keep him close by putting him on a leash around my waist while I worked in the kitchen, say, but that just wasn't comfortable for either of us.

Eventually things worked themselves out.

By now he has learned to navigate his way around the house quite well, and smells his way out of any potential obstacles. The rest of the time he follows my voice.

When I want him to follow me, I wave my hands vigorously -- he does still seem to follow some movement -- and keep up a constant chant of "Freddie, come." It sometimes takes him a moment to figure out where I might be going, but he gets it soon enough. (He hates to be carried, in case you're wondering, and wriggles out of my arms in a second.)

There are accidents, of course, usually outdoors, and despite the leash. Like the time one evening he ran into a neighbor's makeshift fence around a tree made with short iron rods. It was dark and as he bounced around, Freddie bumped his head right right on top of one of them. He seemed to be okay, but the next morning, I found a huge clump of his hair had ripped off. He wasn't bleeding anywhere, and he seemed his usual self, but I learned my lesson about keeping him closer.

So that's what we do. Desi now knows that when he needs to find Freddie, there's only one place he has to look. In fact, Freddie won't even go for a walk with him unless I go too.

As for me, so used I am now to having him around me that if, for any reason, he's wandered away somewhere, I feel as though I'm missing a tail.

And a really gorgeous one at that.

Now on to today's recipe, an old favorite in vegan form, and trust me, the animal-free version tastes better.

Vegan Shortbread Cookies is perhaps the most decadent of all cookies, being as rich as it is in fats (read butter), but it is also one of the most delicious. Just a handful of ingredients go into making it, but the result is ultra luxe and luscious. And, I figured, what better way to celebrate the first day of Spring than with a shortbread scented with the fresh flavor of lemon.

My vegan lemon shortbread is made with Earth Balance vegan butter and some transfat-free shortening, both of which are much lower in saturated fats than butter is. So in the end, they are not just good, they are better for you than their buttery peers.

I sprinkled the top with candied pecans, because I love their crunch on top of the melt-in-your-mouth shortbread, but you can leave out the topping if you'd rather have your vegan lemon shortbread plain. It's super-delicious that way too. 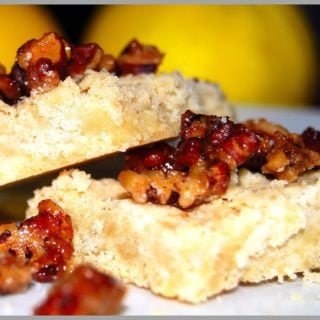 For the vegan lemon shortbread

For the candied pecan topping