A delicious and even healthy vegan pumpkin pie. A crispy, flaky wholegrain crust encases a creamy filling of pumpkin and cashew cream. You would be proud to serve this for Thanksgiving.

The boundaries which divide Life from Death are at best shadowy and vague. Who shall say where the one ends, and where the other begins?

It was a gray, cloudy day in Baltimore a few years back when I breathed in an atmosphere of sorrow at the imposing gravestone of Edgar Allan Poe.

The grave is tucked -- rather anticlimactically -- into what at first appears to be a tiny churchyard near a city crossroads. In fact, you almost stumble upon Poe as you walk in through the wrought-iron gate of the Westminster Hall and Burying Ground. But dig a little deeper, and the macabre begins to emerge. Under the gravestone are catacombs: musty floors of centuries-old corpses stacked one on top of the other, creating the perfect resting place for the dark genius who conceived The Cask of Amontillado, The Black Cat and the Fall of the House of Usher.

Despite the July heat, I remember feeling cold, frigid fingers run down my spine as I stood by Poe. It was a pilgrimage I'd long wanted to make. Truth is, I became obsessed with Poe when I was about 13 and my uncle gave my brother a collection of Poe's short stories. I read them and I re-read them, even when they made me too afraid to move, at times. And although it's been a while since I've read Poe now, I don't think I will ever forget the spine-chilling, stomach-curdling plot of any one of those delicious tales.

But for a fan visiting the grave of one of my favorite authors, I felt rather pale in my shorts and tank top, compared to the two other women there. They were eerily quiet, not talking even to each other, and dressed in what can only be described as dark shrouds. One of them, with some ceremony, lay a black wreath on the gravestone. Next to the grave were some cat treats, no doubt for the numerous (living) cats that are supposed to haunt the cat-loving author's grave, including -- hold your breath -- a black cat.

Poe was obsessed with death, creating dark, troubled, terrifying characters who returned from the grave to wreak vengeance on the living. His fans now are obsessed with his death, which explains why his grave site attracts them like flies. Halloween, with its theme of the supernatural, is an extra-special time in the Poe fan world: they gather by his grave to read his stories, traipse through the eerie catacombs, take ghost tours, and spook themselves out. It's almost as if they are exhorting Poe to return and regale them with more blood-curdling tales of love, betrayal and death.

For 70 years, until 2010, a mysterious, shadowy figure dubbed the "Poe Toaster" visited the gravestone every year, on Poe's birthday, to raise a toast of cognac to the author and leave behind three roses. The Toaster, who has never been identified, created yet another mystery around Poe's life and death before vanishing without a trace in 2010.

Poe is said to have loved Baltimore. He lived in many cities which often try to claim him, including Boston, the city of his birth, Richmond, and Philadelphia, but Baltimore is where he returned to die at just 40. By some accounts, he is still around. At the Horse You Came In On Saloon, a still active pub that Poe went to when he lived, there have been sightings of the author, and staff have claimed seeing drawers open and chandeliers swing on their own. The Poe House, where Poe lived with his aunt and a cousin, is said to be haunted by a woman, but there are also stories of a ghostly "Mr. Eddie" who keeps a watch over the house and the neighborhood.

If Poe loved Baltimore, there is no doubt that Baltimore loves him back. Besides the Poe House and Museum, where the author once lived, and the much-visited grave, you can find lots of Poe memorabilia across this ancient and truly fascinating city (it has always been one of my favorite cities in the United States or anywhere, and I am lucky to live under an hour's drive from it-- it's usually the first place Desi and I take visitors to). There's a Poe statue that depicts the author shifting uncomfortably in a chair, and taverns and inns where you can get a Poe fix. Even the city's football team, the Baltimore Ravens, is named for one of Poe's most famous poems (their mascot is called Poe).

Baltimore today is a far cry from the 19th century city Poe lived in. It's a haunt for young professionals and bohemian artists and boasts a revitalized Waterfront with hip restaurants overlooking a still-busy port. But the ghosts refuse to move out. On board the USS Constellation, that's permanently anchored at the Waterfront, there are stories of strange noises and apparitions. At historic Fort McHenry, a soldier's ghost often puts in an appearance, among other strange happenings. Odd events have also been reported at Greenmount Cemetery, where an infamous son of Baltimore's, John Wilkes Booth, is buried.

So if you ever happen to be in Poe's city on a midnight dreary, take a moment to look over your shoulder. It could just be that one of those fantastic terrors the father of American horror fiction immortalized on pen and paper is lurking around, waiting to whisper in your ear, and make you a believer.

Halloween this year is going to be just a little extra-special around our home, because we actually have a trick-or-treater on the premises. Little Jay has been psyching himself up for candy and pumpkin season, although I can't say he's a huge fan of the scary ghouls and goblins that are making an appearance in porches and front yards.

For me, this season is about all things orange and delicious, and I never let Fall escape without a hearty, delicious Pumpkin Pie.

This vegan Pumpkin Pie is extra special. For one, it's really, really good for you-- even healthy, I daresay, with all the goodness of pumpkin and maple syrup. Even better, the pastry crust is whole wheat and made with just a small amount of coconut oil which also adds delicious flavor and crispness. 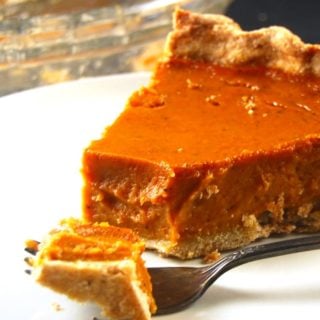 For the pumpkin filling:

Assemble and bake the pie: