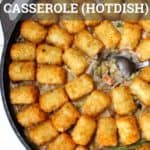 A one-pot vegan Tater Tot Casserole with a creamy, savory filling of veggies and vegan sausage covered by a golden, crispy layer of tater tots. A fun and easy recipe that can also be gluten-free and soy-free.

This vegan Tater Tot Casserole is guaranteed to thrill the child inside you but it'll appeal just as much to the adult you are.

Let's deal with the kid inside you first. This dish is basically a thick, delicious pool of creamy, savory veggies and bits of vegan sausage, topped by a crunchy, golden layer of tater tots. It just makes you want to pick up a fork and start stuffing your face until eternity. And if you actually have one of those little monsters around, you'll find that it's never been so easy to stuff that picky little tummy with this many veggies while getting told, "You're the best cook in the whole world, mom (or dad)!"

All that praise for a recipe with mushrooms? Genius.

And now for the adult. You know this is a one-pot dish because you read that right up there in the header, so you're already going, easy cleanup! But there's more. It's a pretty easy dish to put together too. Almost all the ingredients come from the freezer so there's minimal prep. The tiny amount of chopping and cooking that's required takes no more than 15-20 minutes, tops. After that it's the oven that does all the work for you while you relax and get a manicure. Or a pedicure.

Or, if you're not overly obsessed with the state of your digits, a nap.

You could read a book too. Or watch TV.

Point is, this is a breeze: easy prep, easy cooking, easy cleanup.

If you don't have a cast-iron skillet, you can certainly use any other oven-safe skillet, or make the creamy filling in a skillet, pour it into a baking dish, and then top with tater tots before baking.

Tater tot casseroles enjoy a high degree of popularity in the upper Midwest, and especially in Minnesota, where a tater tot casserole recipe, known as hotdish, is something of a food staple. The story goes that the frugality of hotdish, and the fact that it combined starch, vegetable, and protein, secured its place as a popular family recipe during the Great Depression. I can totally see why. There are no exotic, expensive ingredients here, and although one couldn't -- and probably shouldn't -- argue that tater tots are healthy, the recipe in totality is pretty nutritious with 377 calories per serving and 13 grams of protein from the vegan sausage.

And here's the best part for the cook, which I saved for the last, or probably not because you've already seen the photos. This is one gorgeous dish, and everyone will be rather impressed when you carry it to the dinner table and put it down. Be sure to do it with a tiny flourish. And no, you won't get pronounced a genius by the James Beard Foundation, but you will certainly see lots of happy faces and hear many satisfied burps, and in the end isn't that even better? 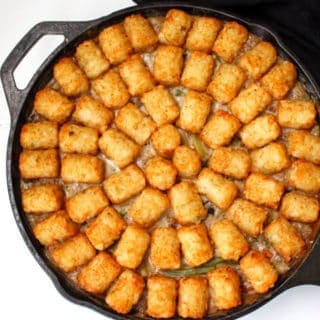