Paneer Bhurji is a popular Indian restaurant dish made with the Indian cheese, paneer. For this vegan Tofu Paneer Bhurji, tofu and a secret ingredient replace the creamy cheese, and the result is just as delicious. Add bell peppers and tomatoes for more flavor and healthfulness.

A bhurji, in India's culinary lexicon, is a messy scramble of any sort. There's anda bhurji, or egg bhurji, a spiced-up version of scrambled eggs that blazed a path from India's street food stalls to become a popular  breakfast staple in every home kitchen. And then there's paneer bhurji, a popular restaurant dish made with the creamy Indian cottage cheese paneer, that's spicier, more lavish, and -- dare I say it -- more delicious.

In recent weeks, I was hit by a deep craving for Paneer Bhurji. Maybe it was the neat slabs of paneer I saw in the refrigerator at the Indian grocery store that did it, or maybe it is this stubborn cold weather that refuses to shake off (it's snowing here in DC today), making me crave warm, spicy, rich food. Either way, I wanted nothing more the other night than to scoop up some Paneer Bhurji with a puffy vegan naan and stuff my face.

There was nothing to stop me. In my refrigerator were some firm tofu, green peppers and red onions -- perfect ingredients for a marvelous vegan Paneer Bhurji. And a healthy one, because while paneer is packed with fat and cholesterol, tofu isn't. But there was one thing. While the tofu would make a perfect stand-in for the paneer, texture-wise, it would not have that very important richness that the cheese would bring to the dish. And that's when it hit me: cashew cream, an ingredient I have often used as a cream substitute in Indian dishes. A little bit would go a long way in making my Tofu Paneer Bhurji taste as luxurious as the original dish.

So Tofu Paneer Bhurji it was that night, and it was quite perfect. In fact, it didn't last around here for more than a few minutes. Which is not to say that I ate it all up. Erm...let's not get into that now, ok? 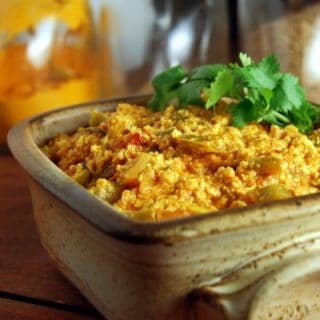