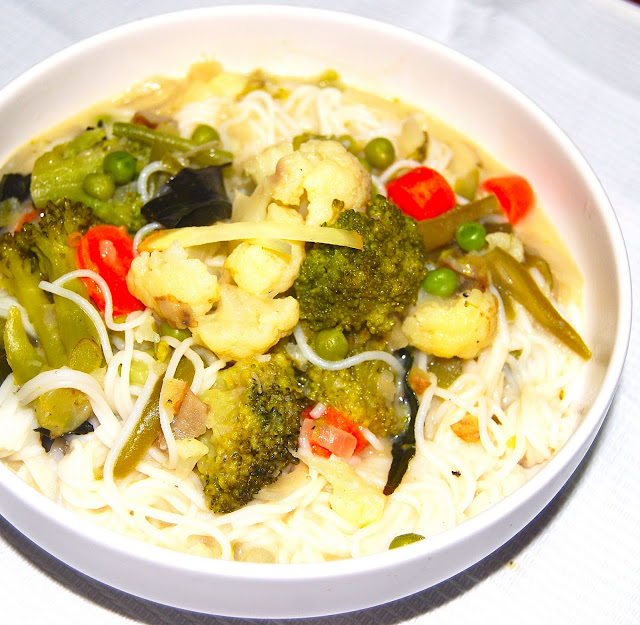 When I was a child growing up in India, noodles were either something you ate at Chinese restaurants for a Sunday treat, or a food that you could buy in bright red and yellow packages at the grocery store and boil up in water for an instant meal. Those ramen noodles -- which every Indian simply referred to as "Maggi" because that was the brand name they were marketed under-- became all the rage when they appeared on grocery store shelves in the 1980s because they offered the superwoman housewife something she had never had before: convenience.

But noodles, although not an obvious ingredient in traditional Indian cuisine, are not foreign to it either. They crop up around India in various forms and at various meals. Vermicilli noodles, angel-hair-like wheat noodles, are the base of a classic Indian sweet dish said to have originated with the Muslims in India but now popular all over the country-- the very special and very delicious semiya payasam, or shevyachi kheer. Vermicilli also features in another well-loved Indian sweet, the falooda, a Persian-origin medley of rose syrup, ice cream, tapioca pearls (saboodana) and -- of all ingredients-- pysllium fiber.

South Indians turn vermicilli into a delicious savory upma. Some deep-fried Indian snacks, like sev and Ribbon Pakoda, are nothing but chickpea noodles. And I remember my culinarily adventurous parents pressing out rice noodles at home to make idiyappam, a south Indian dish that is served with a stew or a curry or even dunked into sweetened coconut milk for a delicious breakfast treat.

The recipe I am sharing today comes via the Indian-British chef Anjum Anand. When I saw her on TV the other day, stirring up a very simple, subtly spiced coconut broth bursting with veggies, to which she added some storebought rice noodles, I wanted to make it rightaway. Anand's inspiration for this dish comes from idiyappam and from ishtoo, a vegetable stew, both foods from the spice-and-coconut-blessed south Indian state of Kerala.

Luckily, she uses storebought rice noodles in her recipe, which is great because I have neither the time nor the energy to press out noodles at home after a hard day's work.

I like this dish a lot for its versatility: I followed Anand's directions and used peas, green beans, cauliflower, broccoli and potatoes. But you could easily change the veggies-- I also added carrots-- and I am sure that some sweet potato or green or red peppers would be divine in here.

Time for the recipe. Hope everyone's having a great weekend. Here in the DC area, as in much of the northeast, we were stuck with the rains for nearly a week but the sun's finally out today. It's beautiful. 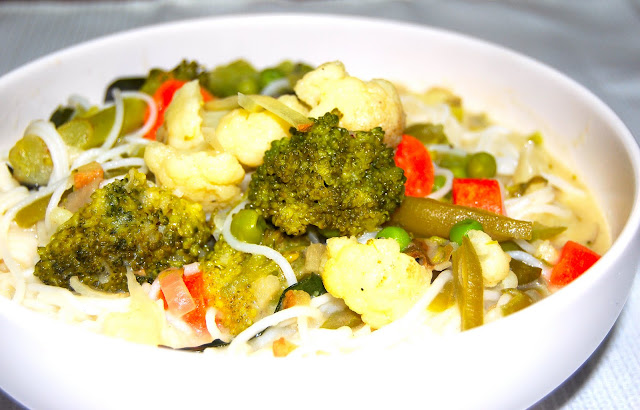 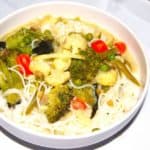