This Vegan Golden Milk, or Turmeric Milk, is milk mixed with a number of cold-fighting spices. It's an ancient Indian Ayurvedic remedy that's stood the tests of time and science. The star of this drink is turmeric, that healing, golden spice that gives a lot of Indian food its fabulous color. Today, I have for you a vegan golden milk, called haldi ka doodh in India, that's just as effective and tasty.

The vibrant color of turmeric is not the real reason this spice is prized in an Indian kitchen. Instead, our grandmothers and their grandmothers have long known what scientists around the world have only recently started to verify-- that curcumin, a component of turmeric, is, among many other good things:

In India, in the absence of an antiseptic cream on hand, anyone knows to grab a pinch of turmeric and place it on a bleeding wound to nip in the bud any possibility of infection. It can be a bit messy-- because turmeric does stain-- but you can't beat it for effectivness.

Turmeric is an essential component in almost any Indian spicy dish, and especially curries. I add it to almost anything Indian I cook, because -- as I've said in these posts before-- I strongly believe in food as medicine. But there are some things anyone new to cooking with turmeric would do well to keep in mind. For one, use it in small quantities: no recipe -- unless made in bulk quantities-- needs more than ½ teaspoon of it.

Turmeric is bitter in taste, and added at the wrong time it can ruin a dish with a raw, unpleasant flavor. So be sure to toast your turmeric-- as you should any raw spice-- in some oil before you add it to your dish. By this I don't mean you should toast it separately. Just stir it in after you've sauteed the onions and garlic and ginger for a curry, so the turmeric mixes in with the oil. But don't add it toward the end of cooking. Get it? (See this post for a deeper dive into cooking with turmeric.)

Today's recipe, though, is an exception, because we aren't adding any oils here. For the vegan golden milk, you'd typically add the turmeric and spices like black pepper, cinnamon, cloves and cardamom to some milk, simmer until it comes to a boil, allow it to stand, and then drink piping hot. It's delicious.

In my vegan kitchen, I substitute the milk with some organic vanilla soymilk. Oatmilk is amazing too, and so is almond milk.

Here goes the recipe for my vegan golden milk. It's simple enough, but I love you enough to share it with you in case you ever have the sniffles. 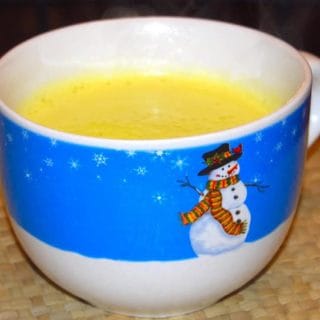