Aloo Posto, or potatoes in a poppy seed sauce, is a delicious dish from Bengal in India. The sauce is flavored with a vibrant mix of five seeds, panch phoron - cumin, mustard, fennel, nigella and fenugreek. A gluten-free, soy-free, nut-free and vegan recipe.

August in Washington is a sly, mysterious month. You never know when the days will pour down with the furious heat of July, or simmer down to September's mild temperatures. And then there's the rain. You can go by for weeks without a drop, and then-- all of a sudden-- you are slammed by a vivid display of lightning, thunder, and a downpour such as you never saw before.

Right now, we're in a bit of a drought. I wake up every morning, look at my thirsty garden, and pray to the rain gods. Well, not literally, but I do tune in to the weather channel with lots of hope in my heart. Because if there isn't going to be any rain, it's me that's going to have to water the vegetable garden. And because watering the garden is my least favorite chore to do, I don't do it as often as I should.

Despite the neglect, my vegetable garden has been fairly productive this year. The okra's been churning out armfuls of slender green fingers, the eggplant's prospering, thank you, and the zucchini's been surprisingly temperamental but still active enough to keep me from complaining.

My heirloom tomatoes, though, have been acting up. About a month ago I had more gigantic, odd-shaped and delicious tomatoes than I could ask for. They were green, orange, pink, and one even had a sunburst painted on its backside. But a couple of weeks back -- I don't know why-- the plants decided to give themselves a break from making tomatoes. Maybe they are protesting the drought or maybe they are rewarding my laziness by being lazy themselves.

Earlier this spring, I buried a couple of sprouting organic potatoes in some space I had leftover in the vegetable patch. The potatoes rapidly shot out long, green, weak stems fringed with wavy leaves, then burst into small white flowers, and as the plants began to die I could tell from the earth bulging at their roots that they had lived up to their promise and multiplied.

With glee in my heart, I dug up those potatoes-- about 25 of them. They were still fairly small, somewhere midway between a baby and your average potato, but they looked big enough to eat.

Back in my kitchen, I chopped them up to make one of my favorite Bengali potato dishes-- Aloo Posto, or Potatoes with Poppy Seeds.

Poppy seeds are a common feature in spicy Indian curries and Western sweets, but no one perhaps uses them as abundantly -- or artfully -- as Bengali cooks do. One wouldn't really think of the bland poppy and the just-as-bland potato as culinary soulmates, but bind them together with another key item from the Bengali pantry-- panch phoron-- and they sing deliciously to your tastebuds.

Panch phoron is a blend of five different seeds, cumin, mustard, fenugreek, kalonji (onion or nigella seeds), and fennel. They subtly lace this dish with notes that are pungent, bitter, earthy and sweet.

Aloo Posto is a perfect dish to serve with some chapatis or rotis, or with a spicy curry and rice. Once you try it, trust me, you'll wonder why you didn't before. 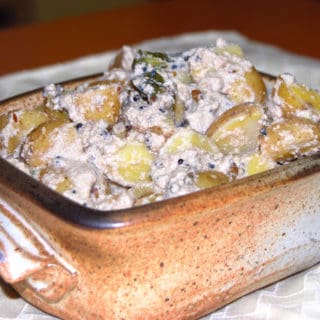