Jump to Recipe Pin Recipe
This creamy, luxurious vegan Apple Cinnamon Oatmeal is the ultimate decadence for breakfast-- but it's good-for-you decadence. Crunchy walnuts and apples and cinnamon add flavor, texture, and sass.

Sundays in our home can feel rather busy. There are calls to be made to India, a dog to walk, errands to run, a house to clean, and food to cook. Sometimes, when it feels like the time is getting away from me and I cannot handle one more thing to do, I whip up this rather simple-- yet sumptuous -- breakfast of Apple Cinnamon Oatmeal. It takes way less time to make than pancakes or waffles, but makes the day feel just as special.

This is perhaps one of those recipes that everyone probably has a version of because it's the quintessential comfort food -- it makes you feel all warm and comfortable and gooey on the inside. But my vegan avatar is also supremely healthy. I make it with vanilla soy or almond milk  and stir in a touch of maple syrup. Finally, for some extra pizzazz-- and nutrition -- I sprinkle on some crunchy walnuts.

You want your oatmeal to be really creamy for this dish, and the secret for doing that is to add the right proportion of water to oats, and cook the oatmeal long enough. While it doesn't take longer than three to five minutes for rolled oats to cook up, once the water has come to a boil, I let the oats go for another 15 minutes to really break them down and get them to a consistency that's just perfect.

But you don't have to save this recipe for the weekends. You do have to peel and chop the apple -- which, to be honest, is more than I can handle on a weekday morning before rushing out the door-- but if you can take the extra five minutes needed to do it, I can't think of a better way to start off your weekday, or week.

Here's the recipe-- approved by Desi, my very own breakfast gourmet and oatmeal connoisseur. Have a great Monday, all! 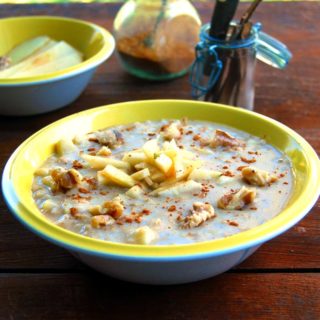