Pizza for breakfast-- now how decadent is that? But when it's my Peach Streusel Breakfast Pizza, loaded with sweet peaches and healthy oats, you can have your slice and eat it too.

I was trying to come up with a kid-friendly breakfast recipe for Jay who, by now, loves pancakes and waffles for breakfast but will still sit in front of a bowl of oatmeal and stare at it with dread -- as if it's going to eat him up instead of the other way round. But he does love fruit and he does love pizza, so I thought, why not serve up some fruits with oats atop a pizza? Not as oatmeal, which would just be yucky, but in a fruity streusel.

And that is how this Breakfast Pizza was born. It turned out to be a hit not just with the real kid, but also with my older kid, Desi, who ate most of it.

Part of the reason why this Breakfast Pizza is so special is the crust, which is a cross between a pie crust and a pizza crust. I used some shortening (trans-fat-free, of course) to give it some flakiness and lightness, and I also used yeast to give it some rise and lift and the right amount of chewiness.For the topping, I used three perfectly ripe peaches, which I reduced to a jammy consistency first, before stirring in the oats, so the crust would not get juice-logged. As the weather ripens, the markets here are already full of sunny fruit, and what says Spring better than a ripe, juicy peach? With the sun shining like never before on the day I made this, Desi could even go out to the backyard to get the photos in natural light.

This is a good recipe to prep ahead of time. You can make the dough a couple of days in advance and refrigerate. And although I wouldn't recommend making the topping way too early, you have just enough time, while the crust pre-bakes, to make the topping.

This would also make a great dessert recipe-- just skip the oats. And if you wish, you can also substitute half of the all-purpose flour with whole wheat pastry flour. The dough would be a little harder to roll out, but certainly healthier. 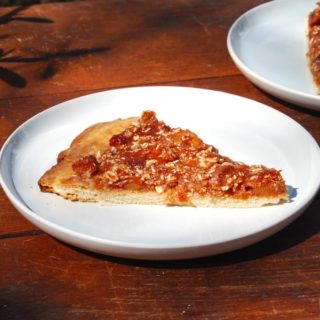 For the peach streusel topping