Weekends are pretty awesome. Make yours even more so by cooking up this Vegan Lentil and Quinoa Steak, and then smothering it in a savory mushroom sauce. A healthy, protein-packed, gluten-free, soy-free recipe.

These vegan Lentil and Quinoa Steaks make a great lunch or dinner option. They're quick and easy to make but fancy enough for a special meal, and they taste amazing, especially when they are served smothered under a creamy mushroom gravy.

I wanted to make a quinoa-based steak after eating a red quinoa steak at the Irish pub in my neighborhood. They've actually added a whole vegetarian section to their menu in recent months, and their quinoa steak is entirely vegan.

I really love the idea of that steak, but it's served on a bed of roasted and raw veggies without any sauce or gravy, which makes it rather bland. Which, of course, I don't love. (Sidebar, well-meaning omnivores: we vegans love flavor just as much as you do).

So when I set out to make a quinoa steak, I wanted to pack it with flavor. That doesn't mean there's a lot going on here. There are, as the name suggests, lentils and quinoa in this recipe, and they create food alchemy along with potatoess. Some salt and pepper, a dash of garlic, and you're pretty much done.

You don't want your steaks to be bland but you don't want to over-season them either. That's because you want them to drink in that amazing mushroom gravy before you put a forkful into your mouth.

You cook the steaks in a non-stick pan with very little oil and they develop that lovely crust. They don't actually have the texture of steak, but they hold together really well and have a great mouthfeel.

Plus there's nothing in here that's not good for you. Both Desi and Jay gave these a thumbs up, and I know I'll be making them again and again.

How to master these amazing vegan lentil and quinoa steaks: 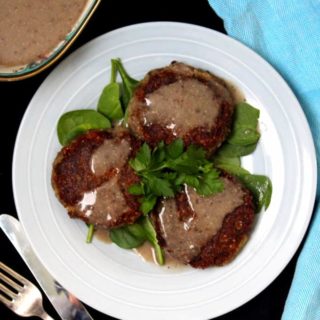